Back in the early 2000s, it was exciting to blog and use social networks to create our own media and move away from the traditional media outlets. That was the pull that got me into blogging and got me investing in Twitter. It was a powerful feeling.

But a decade and a half later, it is obvious that we just replaced one type of media company for another and that we don’t really control our own media yet. I have a bit more control over this blog because I run it on my own domain using open source WordPress software, but most people are blogging on Medium or Substack or some other centralized service these days. And the social media platforms, well we know all about them in the wake of recent takedowns. You don’t control your own media platform if you run it on a centralized service.

So a few months ago, I mirrored this blog on Mirror, a decentralized blogging platform. You can view it here.

And yesterday, I claimed @fredwilson on Bitclout with this tweet:

Claiming my Bitclout
my public address is:
BC1YLh1YEjhauU8cxmGAK59EFmGxbG65NmMrj92LfQfkjU2ZCgE7xUy#bitclout

Around that same time, I saw this post on Bitclout: 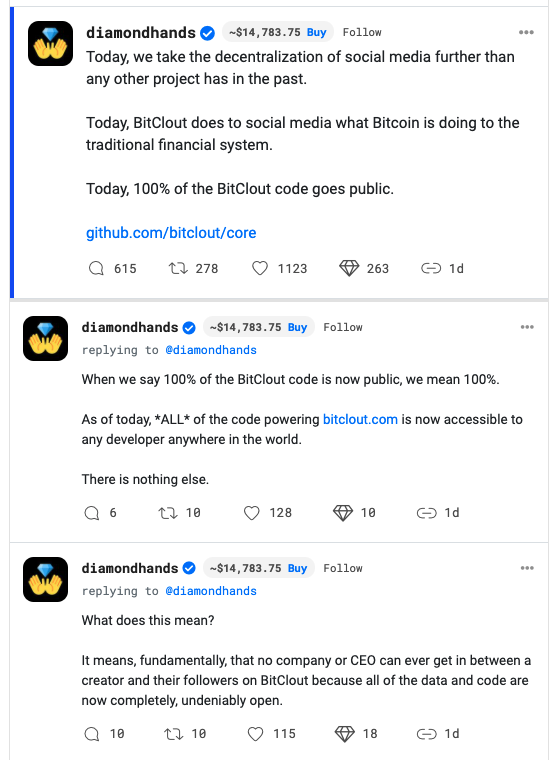 Here is the thing about blockchains and crypto – the data is public on the blockchain. Nobody controls it other than you with your private keys. And when you put open source software together with that, you get decentralized applications that nobody can mess with, not even the creators of those applications.

I don’t know if Mirror is the new WordPress or if Bitclout is the new Twitter. We will see. But it sure feels like we are back in the early 2000s again, experimenting with decentralizing media. I have the same feeling of excitement I had back then.