Perry Mehrling’s money view framework is an economics that is grounded in the tradition of American institutional economics, and I would say, in the broader tradition of political economy. But also in the real practices of countercyclical policy intervention, drawing on the writings of actual central bankers. It allows us to generalize beyond Keynesian versus free market approaches to economics.

Mehrling’s approach to understanding money and how it functions in the economy can provide actionable insights into how to invest & innovate in digital economies, specifically the aspect of attention. Today I will give one example of how this is the case.

We start from Mehrling’s hierarchical categories of money:

As we recall from Intrinsic Macro #41, the top of the hierarchy is real money, the bottom part is more a form of credit or promises to pay.

When there is economic expansion, the hierarchy gets flattened, and more things seems like money, because securities, stocks, and risky assets go up in value as perceived innovation & speculation increases. This leads to manias & bubbles. When there is contraction, the hierarchy re-asserts itself, as repayments come due, then things that seemed like money show that they were really credit. 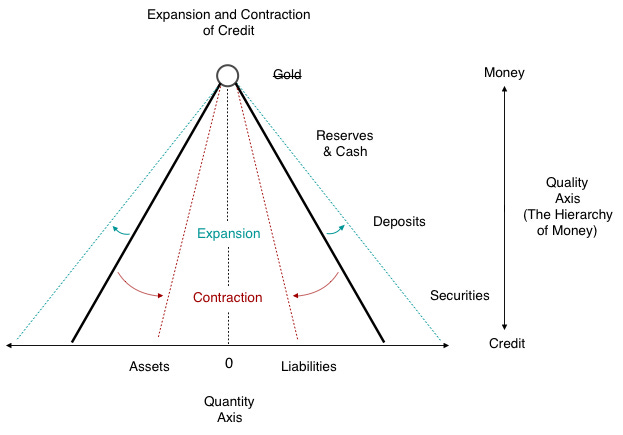 Data is the most money-like not only because it is sold in the marketplace and drives revenues of big tech companies, but because it is the closest to money as a predictor of human behavior & motivations.

Code builds infrastructure for digitals networks by which data can be collected, and it is also used to analyze and aggregate data.

Premium content is gated or paywalled content, which is a productive economic good that is generated by participants of these digital networks.

Free content is what drives attention to the network and converts users to premium.

There are several practical observations that we can draw from this comparison:

1.) This can explain why fake news is so prevalent, because most content we see online is free content, which can have the properties of an IOU, a promise to pay later, but not necessarily. Some free content is reliable, some isn’t.

2.) In a period of what we could call “data expansion,” content becomes more data-like.

4.) Gold is the ultimate money, yet the banking system largely does not use gold as collateral anymore.

5.) Similarly, while data may be the most money-like thing in the digital economy, data is not scarce. The thing that is scarce is attention or time. And this means that attention gets increasingly economically valuable as there is more and more free and premium content. And therefore, it is possible that attention can serve as a form of collateral.