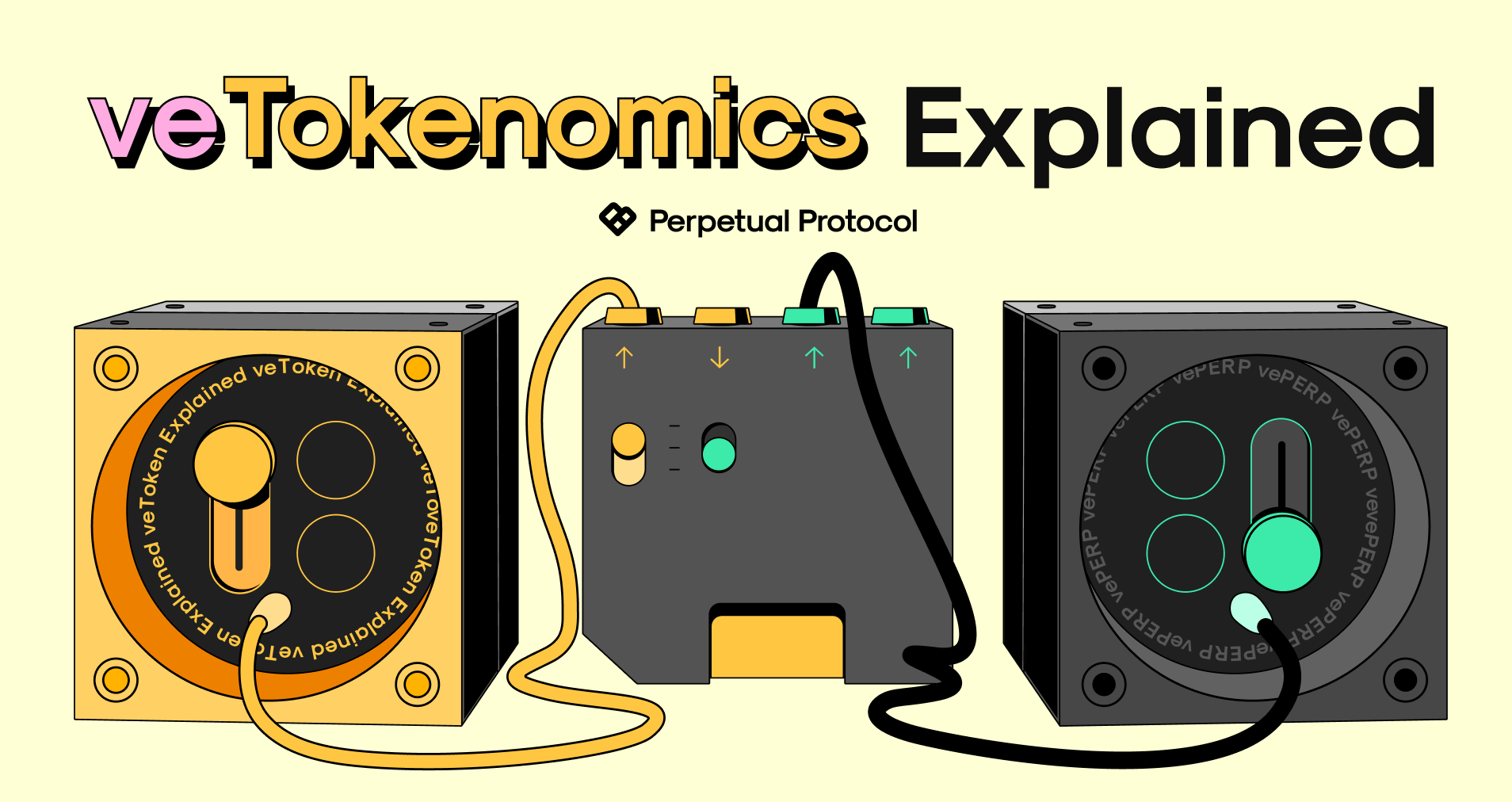 You may have heard that we’re upgrading the PERP tokenomics! With the imminent move to a veToken model, we want to further incentivize long-term community growth and improve how the value generated by the protocol is distributed to users. But what exactly is veTokenomics? Read on to find out more!

Most tokenomic models in DeFi run into the following problem: while bootstrapping usage of the protocol over the short term, the incentives eventually run dry and interest fizzles out. A small handful of whales can bleed it until it’s dry, provide a large amount of liquidity and capture the majority of the token emissions, then dump these tokens on the market for a quick buck.

Another problem is that the incentives of the users are not aligned with the long-term health of the underlying protocol. Since governance requires you to hold tokens to participate in voting, the one token:one vote model is open to abuse by whales seeking short-term gains. They can pass proposals to change the direction of a protocol, either to benefit themselves or sabotage a project, then dump the tokens after.

Governance tokens that offer nothing else of value other than voting rights are undoubtedly outdated and have not proven themselves as an optimal model for DeFi projects. With nothing else other than ‘governance’ driving demand, there’s little incentive for anyone to become truly invested in a project.

One tokenomics model that does stand out though is the ve-model (short for vote escrowed). You may have heard of it before, most likely if you’re familiar with the most popular stablecoin DEX Curve. But what exactly makes this model stand out compared to what we’ve described above, and why has it been so successful?

Vote-escrowed tokenomics (or veTokenomics), introduced by Curve, is a model whereby tokens must be locked for a specific amount of time that incentivizes long-term participation and reduces the available supply on the market. In return users get veTokens, which are non-transferrable and do not have any external markets whereby users can sell them.

The idea is that to have a say in governance or to earn more of the emissions generated by the protocol, you have to commit to locking your tokens over a fixed period of time. The diagram below illustrates how someone can lock their tokens to increase their voting power and claims on a protocol’s cash flows. 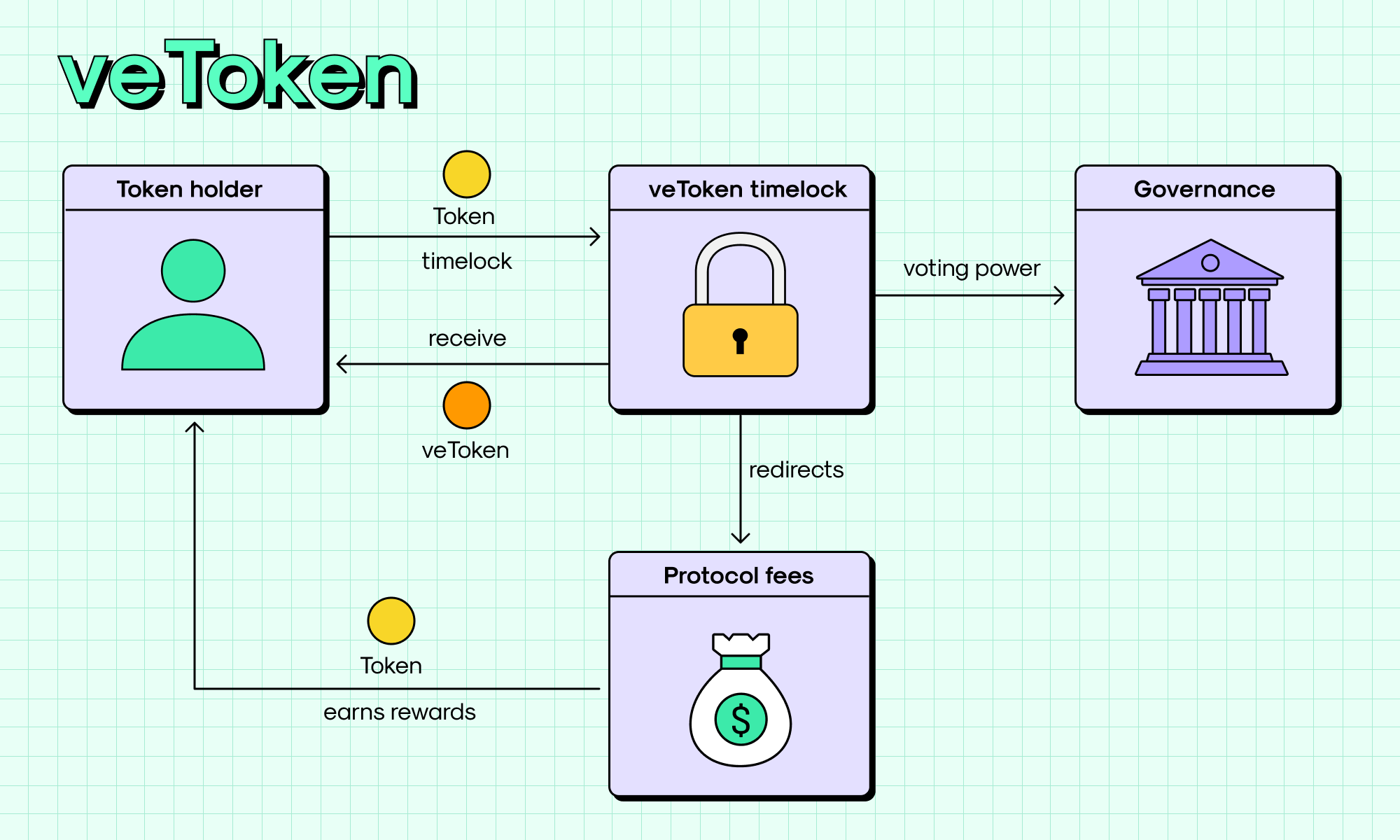 Some DeFi projects already allow you to lock up your tokens to earn a share of the protocol revenue. But the difference with the veToken model is that holders of these locked tokens can decide the flow of emissions and hence increase the liquidity of a certain pool.

Such a mechanism encourages not just buying and holding, but also removes tokens from the circulating supply over long time horizons. The incentives of tokenholders and the long-term success of a protocol are better aligned, since whales cannot simply just buy a large bag and have sway over the project’s direction or rewards.

To make the concept clearer, let’s take a deeper look at how veTokenomics is implemented by Curve.

Curve: The Pioneer of veTokenomics

Just like most other DeFi protocols, there are token incentives for providing liquidity to Curve’s pools. In return, you receive LP tokens which can then be deposited into the Curve gauge, which yields the Curve DAO token (CRV), which can be boosted by locking CRV. The gauge mechanism is detailed in the diagram below. 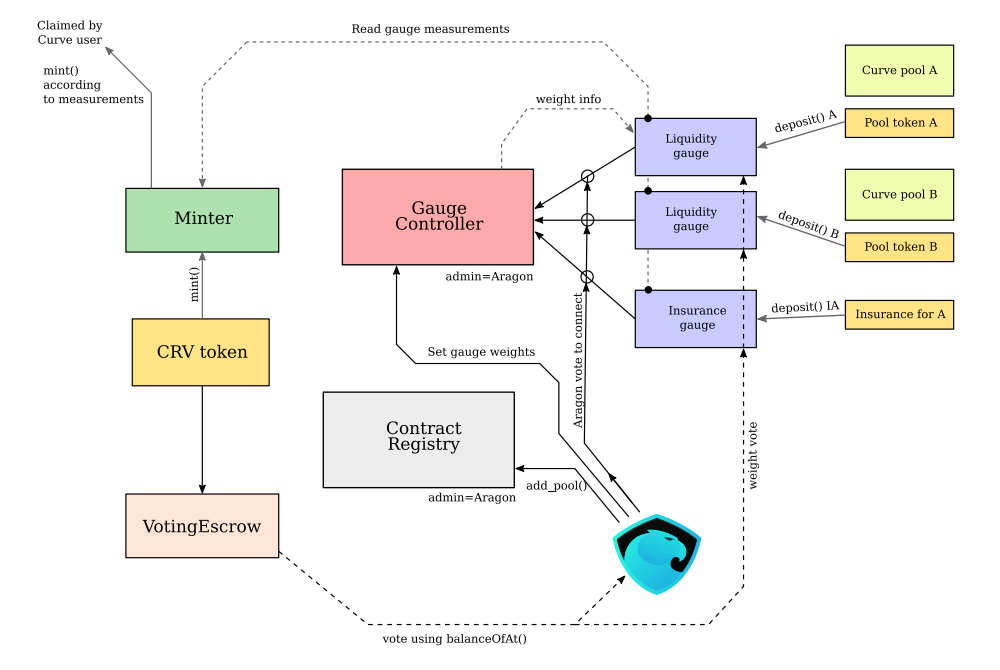 LPs not only earn the Curve DAO token (CRV), but also the fees generated by the Curve finance are split 50:50 between LPs and veCRV holders. To get veCRV, you must timelock and give up the liquidity of your CRV governance tokens, which carries three major benefits:

Holders can lock their coins for varying time periods, ranging from one week to as long as 4 years, where those that commit for longer obtain greater sway over governance and higher rewards. The idea is that if someone is committed to locking up their CRV for 4 years, then it’s safe to assume that they want to see the project succeed and their incentives align with the protocol’s.

Once CRV is locked, it cannot transfer or sell their coins until the lock up period is over and encourages them to make decisions that are less influenced by short-term gains and more influenced by the long-term success of the protocol.

Each Curve pool has its own liquidity gauge where users can stake their LP tokens to direct the CRV inflation to different pools, determined through a veCRV holder vote. When locking tokens for a maximum of 4 years, LPs get a 2.5x CRV boost as well as greater voting power. Instead of being weighted by just the amount of tokens you hold, voting power is also weighted by the time period you’ve locked your CRV for.

Such a dynamic ensures that the token issuance is carried out in a democratic way and encourages long-term participation in DAO proposals. CRV holders who are just short-term speculators will have no voting power in governance because they didn’t commit to locking their tokens.

The table below is a useful comparison of the benefits of locking CRV into veCRV, which drives demand for the token while also reducing the circulating supply:

What are the Benefits of veTokenomics?

One of the most obvious benefits of the veToken model is that it incentivises holders to remove more CRV from the circulating supply by locking into veCRV. With a lower circulating supply of tokens, this should stabilize the price and reduce selling pressure over the long term.

The chart below shows that around this time last year, there were 151.7 million CRV locked when the outstanding supply was 545.3 million CRV. Now the amount of locked CRV has more than doubled to 505.6 million CRV versus the current circulating supply of 1.16 billion. 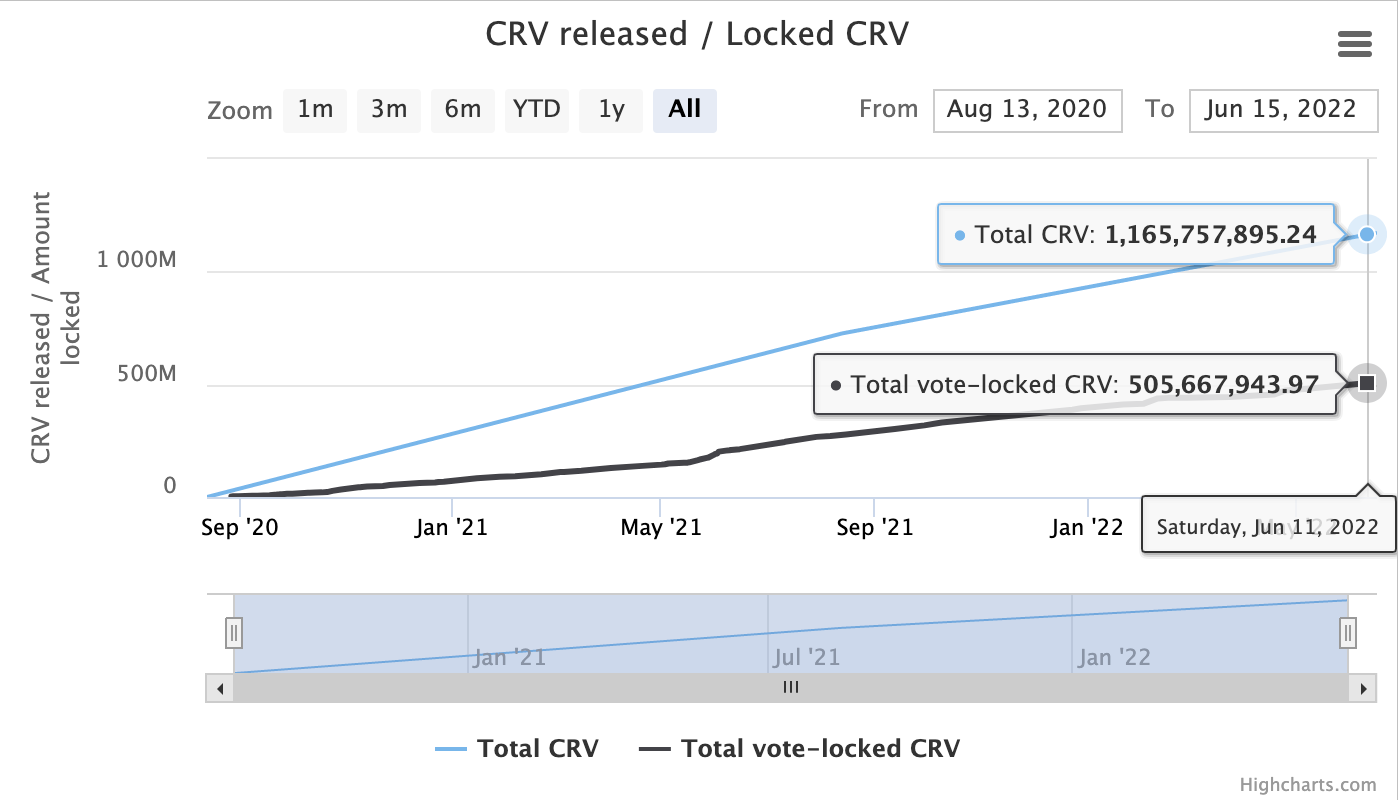 With the rate of locked CRV growing faster than the rate of supply, this has a positive impact on supply dynamics and ultimately should support the price over the long-term. The initial wave of DeFi governance tokens were farmed and dumped, with nothing substantial holding up the price as there was no demand for these tokens outside of speculation and governance rights.

The percentage of CRV supply locked grows over time because people want the valuable rights to governance, enhanced yields, discounts and cash flows generated by the protocol. In effect, this mechanism aligns the priorities of different types of users (traders, LPs and tokenholders).

Given that Curve has the most liquidity out of any DEX by far, stablecoin projects have competed with each other to acquire as much CRV as possible, lock it into veCRV and redirect token emissions to their pool.

By doing this, it incentivises more liquidity to be added to these pools and improves the ability of a stablecoin to maintain its peg. Because of this mechanism, we’ve seen Convex finance, Yearn finance, Abracadabra and many more projects participate in what’s known as the Curve wars, leading to increased buying pressure for CRV.

What are the Drawbacks of veTokenomics?

While there are certain advantages to the veToken model, there are some limitations to be aware of:

There’s been some lively debate about the viability of veTokenomics as well as its strengths and weaknesses. If you want to learn more about some potential drawbacks, we recommend checking out this article as well as the arguments against veTokenomics from the MakerDAO governance forum.

Nevertheless, given the advantages of the veToken model over previous approaches, it has been widely adopted and refined across different DeFi protocols, some of which are outlined below.

Frax Finance first proposed the implementation of the veCRV idea for veFXS in May 2021 (original governance proposal here). While the idea is similar to Curve’s model, veFXS holders vote on gauges that direct FXS emissions across different pools on different DEXes while veCRV holders only influence the gauge weights on CRV emissions for specific pools on Curve.

Balancer introduced veTokenomics in March 2022 and the main departures from Curve’s model are:

The second point is worth noting, since Balancer is the first to adopt a liquidity pool token as the mechanism for governance.

The ve(3,3) model is implemented by Velodrome, a newly launched DEX based on Optimism.

Ribbon Finance also introduced a ve-Token model in February 2022. Their version of the Curve model, veRBN, allows users to “early unlock” their tokens, but they have to pay a penalty to do so. RBN holders can lock their tokens for up to 2 years to maximize their veRBN voting power.

There are many other protocols considering a move to the veToken model given that it has stood the test of time and led to a thriving ecosystem being built around Curve. As shown above there are many variations and interesting design choices, influenced by the limitations we mentioned above.

Stay tuned for a more detailed look at the changes to our tokenomic model with the upcoming vePERP upgrade!

Translations of this article are available in Español, Farsi (فارسی), Hindi (हिंदी), Mandarin (普通话), Russian (Русский), Swahili, and Thai (ไทย), thanks to the help of our Perpvangelists!

DAPPOS X Perpetual Protocol Trading CompetitionWhat are Futures?How to Securely Self Custody Your Crypto-AssetsIntroducing vePERPCelebrating Christmas with 12 Days of Giving!