Why Bitcoin is more than the money you know

Imagine, you work so hard for 30 years and save money for your retirement thinking that one day you will actually achieve your financial goal, get time to spend with people you love, and travel to places you like. Maybe even buy land and build a house — you finally made it. But wait, is life that simple? Work hard for 30 years, sacrificing all the time for work that doesn’t even matter to you at the end of the day? Well, like it or not, that’s life for most people. Because the system that runs the world is designed just like that.

Now, imagine again, after successfully saving all the money you have for your retirement for 30 years, it suddenly disappears or technically loses all its value. Well, that’s exactly what has been happening since the last century. The purchasing power of the U.S dollar has reduced by a whopping 96.13 per cent of its value since 1913. That means, if your grandfather saved $100 for you in 1913, you will only have $3.87 in value today. Of course, the $100 dollar note will be the same, but its value is no longer the same. See below the visual representation of the rise and fall of the dollar. 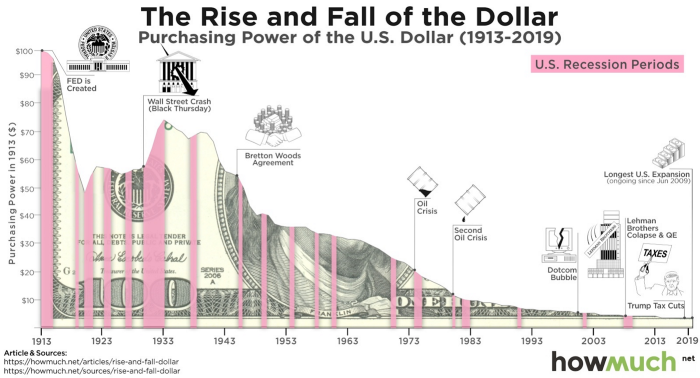 Why this? And how does the value or the purchasing power of our money decrease over time? Well, it’s just because the government or the central banks are printing money out of thin air. Of course, they don’t tell you they are printing money, they just say ‘Quantitative easing’ or ‘Liquidity injection’. In other words, they are increasing the supply of money into the system or the market. And this affects all of us because money does not equal wealth. Wealth is created when value is produced. Now, I don’t want to bore you with the definition of money, because you already know what money is. If you don’t, you can just google ‘what is money?’ and get better answers. The point I am trying to make here is, the hard work you put in to earn that paper money is not worthy of what you think. The system is designed in this way and only a few who control it know this. Shockingly, no one dares to challenge this system until recently.

Fourteen years ago, when I was in 4th grade in a distant village in Northeast India, a new concept of money was established. I had no idea how banks worked or what money was at the time. I’m pretty sure more than half of the people in my state didn’t have a bank account at the time. (Please correct me on the statistics)

During the aftermath of the 2008 Economic recession and exactly 45 days after one of the biggest banks in the United States, Lehman Brothers collapsed, an anonymous by the name Satoshi Nakamoto published a nine pages whitepaper, Bitcoin: A Peer-to-Peer Electronic Cash System. The 3,219 words whitepaper solves one of the biggest problems of our time and turns out to be the most innovative technology ever invented in the 21st century.

The Bitcoin we know of today is not money in itself, but a concept of money rooted deeply in the principle and philosophy of civilization itself. I personally cannot give you the definition of Bitcoin, because I don’t know and it is not necessary to know. And at the same time, the idea of Bitcoin needs to be understood in the interdisciplinary domain, from Mathematics to Economics, from Social Science to Geopolitics, from Computer Science to Finance, from history to modern day civilization and many more. But what is its principle and philosophy and why is it more than the money we know?

Reading Satoshi Nakamoto’s whitepaper always amazes me how in a world can a technology, a philosophy and a story be so beautifully invented and written. I thank God for Bitcoin every single day because it’s just so beautiful and marvelous. Again, I won’t bore you by explaining the technical logic of Bitcoin presented in Satoshi Nakamoto’s whitepaper here. If you want to read the original whitepaper, you can find it on the internet.

A decentralized and a true democracy system-

In a nation’s concept of democracy, the people elect their leaders and the leaders represent them by taking the decision in their name. And in the business world, the owner or the shareholders makes the decision about how a business should operate and function. In essence, there is always an individual or a group of individuals controlling the system to make decisions. In the case of Bitcoin, no one can change the source code in other words, nobody controls the function of Bitcoin. No government, no corporation can control Bitcoin. Bitcoin doesn’t have a President or a CEO. It cannot be changed and it cannot be controlled. To have influence over the Bitcoin blockchain, you must become a miner and run a Bitcoin node on the network. Still then, you cannot make any changes at will you can only propose but again it is subjected to the majority vote running node on the network.

An Equal Opportunity for every human-

Bitcoin as a technology and a concept of money does not discriminate against anyone based on nationality, race, economic status or anything. It presents the opportunity to anyone and everyone. Nobody can stop you from using it thus it is permissionless. In other words, anybody with a smartphone or a computer with access to the internet can use Bitcoin. No matter if you are in a remote village in Africa or India or living in Metropolitan London, New York or Hong Kong, you can use and own Bitcoin and nobody can stop you. Bitcoin is a distributed technology anyone can access. This makes Bitcoin a Freedom technology because every Bitcoin user can send, receive and hold it.

An Open and verifiable system-

The transactions on the Bitcoin network can also be verified. If anyone tries to corrupt the network by sending money they don’t own, or to manipulate, the system won’t accept it. The system verifies all the activities before it is done.

Unlike the banks and the government institutions which require trust to run them, Bitcoin doesn’t require any trust. Bitcoin is a piece of code that exists in an open source, it operates on predefined conditions that anybody can know and nobody can change. As such, no trust is needed to use Bitcoin because nobody controls it. To verify the transactions, no third party is required to do the job, instead, Bitcoin works on something called proof-of-work where miners who run the nodes on the network verify and validate the transaction using a timestamp network. Because of its trustless nature, Bitcoin advocates for ‘Don’t trust, verify.’

Thus, Bitcoin is not just a technology, it is a philosophy and a concept that cannot be stopped no matter how hard you try, not even the government. The best thing the world can do now is to embrace this technological revolution and solve most of our problems today. Forget about the economic values Bitcoin can give and focus on its ideas and principles because Bitcoin is not just about money. It is a technology the world needs now more than ever before.