The Addictive Nature of Midjourney: How it Already Disrupts the Entertainment Industry

I never thought I would become addicted to something like Midjourney, an AI image generator that allows users to create highly realistic and customizable images of people, places, and things. That's exactly what I began to see happening though, but only because I’ve become sensitive to the ways that technologies can hook us.

The entertainment industry is facing a significant disruption from the rise of AI image generators, which are not only stealing the attention of audiences but also reshaping the entertainment landscape. These generators, such as Midjourney, are becoming increasingly popular and addictive, with users spending large amounts of time creating highly realistic and customizable images. To understand this phenomenon, it's important to examine the principles outlined in the book "Hooked" by Nir Eyal. The book delves into the psychology of why certain products and services can become addictive, and it's principles can be applied to the analysis of AI image generators.

In addition to the Hooked model, the attention economy, coined by psychologist, economist, and Nobel Laureate Herbert A. Simon, plays a key role in understanding how these generators are disrupting the entertainment industry. As businesses compete for the limited attention of consumers, AI image generators are already capturing large amounts of it, reshaping the way we consume entertainment and creating new forms of it.

It’s difficult to find numbers regarding Midjourney users, however Tokenized reported even back “in late September 2022, it’s at an insane 2.7 million members, and at any given time, between 300,000 and 600,000 of those members are actively online.” This refers particularly to the Discord server which is how users interact with the AI to generate their images. This hub also becomes an interactive community.

As I myself jumped in and experimented with these AI image generators, first with DALLE and now Midjourney, I became aware of the time and attention they consumed. What I see then is that the trade-off of my time and attention comes at the expense of other entertainment — streaming services like Netflix, HBO Max, and Disney+. Given they are all also subscription models, I see how tradeoffs will be made and streamers cancelled to support AI image hobbies. Everyone has predicted how the entertainment industry will be disrupted in the production of content, however it’s already beginning to lose out against another entrant in the attention economy.

As the competition for our attention becomes more intense, these generators are already capturing large amounts of it, reshaping the way we consume entertainment and creating new forms of it. 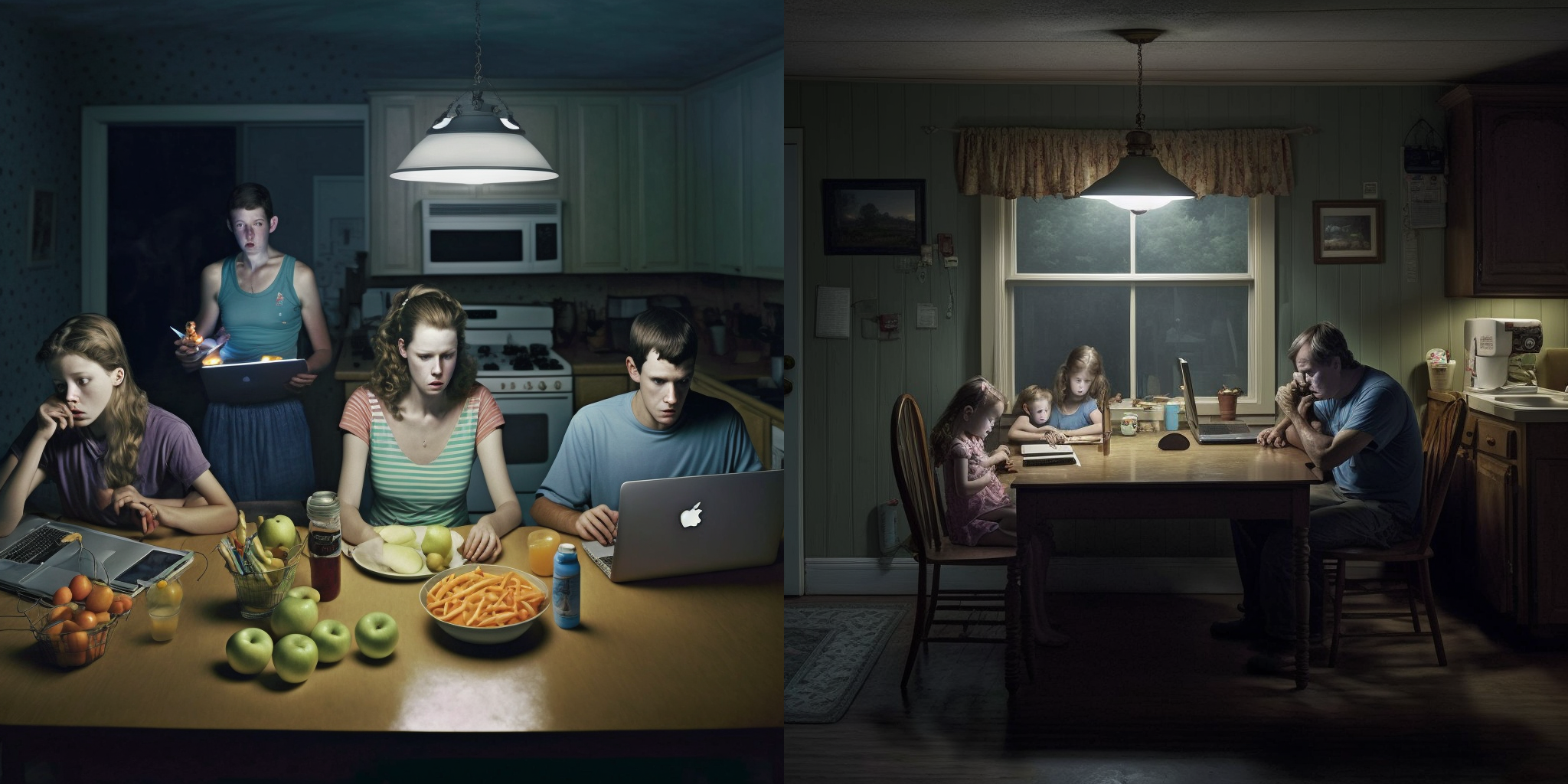 The Hooked Model, as outlined in Nir Eyal's book "Hooked," is a framework for understanding why certain products and services can become addictive. The model consists of four steps: trigger, action, reward, and investment. In the context of AI image generators, these steps can be applied to understand how the technology becomes addictive to users.

The trigger for the use of AI image generators is the desire for entertainment or the need to create content. The action is the actual use of the generator, whether it be scrolling through generated images or creating one's own. The reward is the satisfaction and engagement that comes from viewing or creating these realistic images. Finally, the investment is the time and effort that the user puts into using the generator, such as creating their own images or learning how to use the technology more effectively.

One of the key elements of the Hooked Model is the use of variable rewards. These are rewards that are not always the same, but are instead unpredictable and varied. In the case of AI image generators, the unpredictable nature of the images and videos that can be created with the technology is a key driver of its addictiveness. Users are constantly engaged in a "treasure hunt" for new and interesting images, which keeps them coming back to the technology again and again.

Another important aspect of the Hooked Model is the investment step. As users continue to use the technology, they become more invested in it. They may spend more time using it, or they may learn new techniques and skills to create even more impressive images. This investment in the technology further reinforces the user's engagement and makes it more difficult for them to stop using it.

As the technology becomes more advanced and accessible, it's crucial to understand the potential implications of its use, especially its addictive nature.

In today's digital age, the competition for attention has never been more intense, with an endless stream of information and entertainment available at our fingertips. The entertainment industry is no exception to this trend, with companies constantly vying for the attention of audiences.

Our attention is consumed by many different things, including advertisements, products, entertainment, social media, and even sleep. Attention is also consumed by tasks such as learning, problem-solving, and decision-making. Additionally, our attention can be consumed by things that cause us stress or anxiety, such as worrying about the future or feeling overwhelmed.

As the former Co-CEO of Netflix is famous for saying, their number one competitor is sleep. As reported in Fast Company:

More specifically, explains Hastings, there are only a certain amount of hours which humans can tend to activities, and Netflix’s goal is to occupy those moments–and deliver the utmost joy to the consumer during that opportunity.

“You get a show or a movie you’re really dying to watch, and you end up staying up late at night, so we actually compete with sleep,” he said of his No. 1 competitor. Not that he puts too much stock in his rival: “And we’re winning!”

Unlike traditional forms of entertainment, such as television or film, AI image generators offer an ever-changing and unpredictable stream of entertainment. This makes them highly engaging, and users can easily spend hours scrolling through the generated images or creating their own. Once a user begins sending prompts to the AI, it creates a sense of engagement and satisfaction that can be hard to replicate with other forms of entertainment.

As the technology becomes more advanced and accessible, it's important to consider the implications of its use and how it may reshape the entertainment landscape. Companies in the industry should adapt and incorporate AI image generators in their strategies to remain competitive.

The film and TV industry is already facing challenges in the attention economy, with technology-based forms of entertainment, such as video games and social media, capturing a larger share of audiences' attention. This trend is likely to continue as AI image generators become more advanced and accessible.

The film industry is already feeling the effects of this trend, with a decline in box office revenues and a shift towards streaming services. The growth of streaming services, such as Netflix and Amazon Prime, has led to a decline in traditional movie-going. As AI image generators become more prevalent, they may begin to displace traditional forms of entertainment, further eroding the film industry's audience.

Furthermore, AI image generators have the potential to create new forms of entertainment that are not currently possible. For example, AI image generators can be used to create highly realistic virtual worlds and characters that can be used in video games, virtual reality experiences, and even in film and TV. This could lead to a new wave of entertainment that is not currently possible with traditional technology.

The film and TV industry is already losing in the attention economy to technology-based entertainment, such as video games and social media. As AI image generators become more advanced and accessible, they have the potential to further disrupt the traditional forms of entertainment, such as film and TV. However, it's important to note that AI image generators also have the potential to create new forms of entertainment that are not currently possible. Companies in the industry should be aware and adapt, but also be conscious of how they incorporate AI image generators in their strategies to remain competitive in the attention economy.

Our Preferred State of Being

As the technology becomes more advanced and accessible, the question arises whether we as a society want to engage with addictive technology or if technology should be designed to negate the addictive aspects described by Eyal.

On a personal level, it highlights the dangers of becoming too immersed in virtual worlds and the potential for addiction to technology. It also serves as a reminder of the importance of balancing the use of technology with the responsibilities and relationships in our real lives.

It raises important questions about the role of AI in our lives and the potential consequences of its unchecked use. As AI technology continues to advance and become more integrated into our daily lives, it's important that we consider the impact it may have on our mental and emotional well-being.

Our societies should weigh the pros and cons of engaging with addictive technology, and consider the ethical implications of AI image generators. It's crucial for the industry to adapt and incorporate these generators into their strategies in a responsible way that takes into account the potential negative consequences.

Ultimately, the key is to strike a balance between the benefits and potential harms of technology. By providing users with information and tools to make more informed decisions about their technology use, we can help to mitigate the potential for addiction and other negative effects.

Feel free to subscribe for more writing like this, and you can collect the art from this article at:

Audience Engagement: The Making of MeaningNo Audience Member Left BehindThe Future of Media Lies in CurationThe Addictive Nature of Midjourney: How it Already Disrupts the Entertainment IndustryBuilding an Ownership Economy with NFTs