A beginner’s guide to DAOs

A decentralized autonomous organization (DAO) is a group organized around a mission that coordinates through a shared set of rules enforced on a blockchain.

One of the main benefits of a DAO is that they are more transparent than traditional companies since all actions and funding in the DAO are viewable by anyone. This significantly reduces the risk of corruption and censorship. Publicly traded companies must provide independently audited financial statements, but shareholders only get to see the financial health of the organization at a snapshot in time. Since a DAO's balance sheet exists on a public blockchain, it is completely transparent at all times, down to every single transaction.

DAOs typically are more globally accessible and have lower barriers to entry than companies. Given the transparency and lower barriers to entry, there will likely be lower switching costs for DAO members who don’t agree with the rules and actions. DAOs sharing a similar mission might need to compete for members and are incentivized to be as transparent as possible and not extract too much rent from the group so that they are able to attract top members. DAOs might also need to quickly evolve to meet the members' needs. 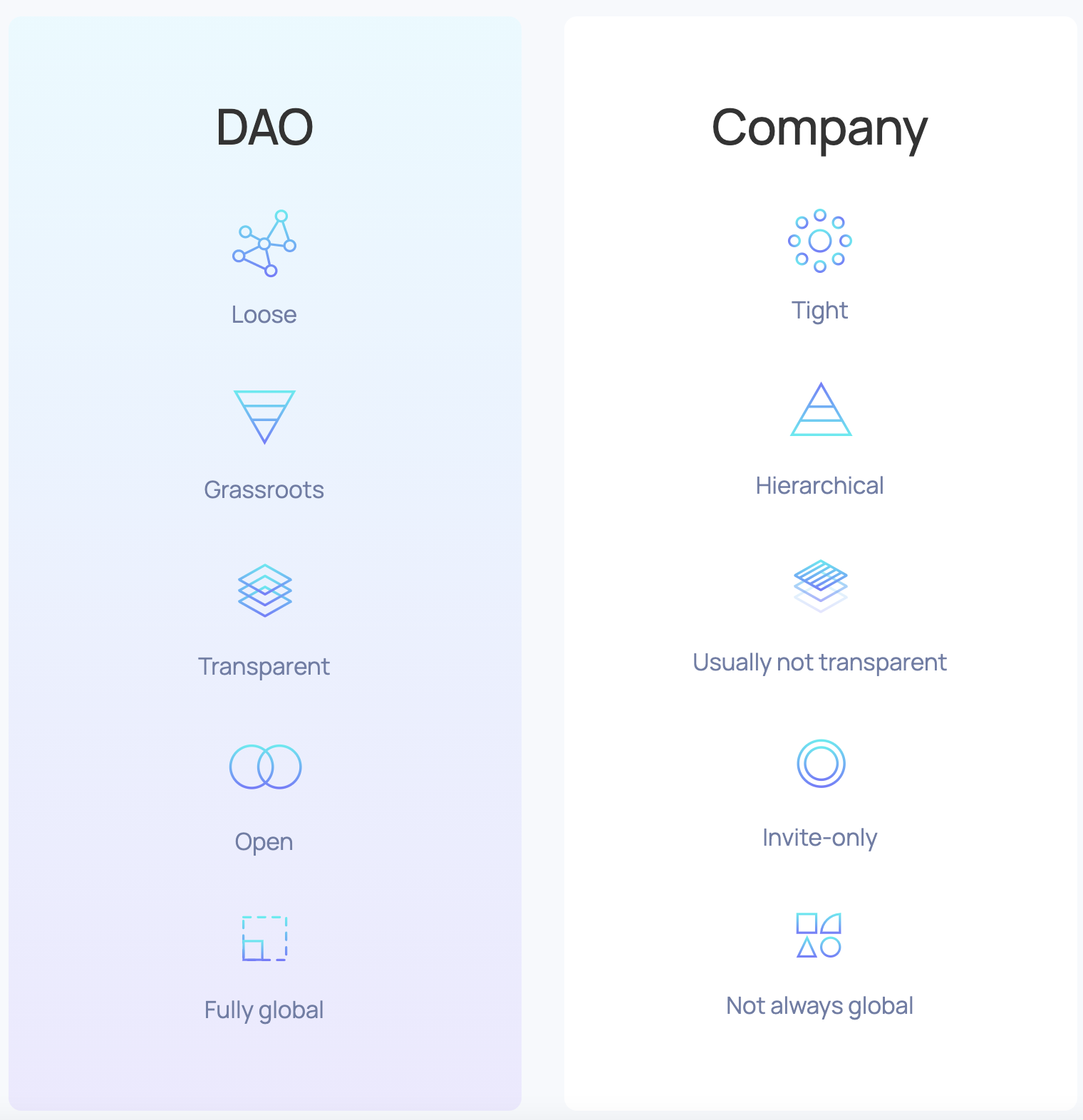 The goal for this post is not to detail every DAO in crypto, but to give a high level overview of what DAOs are, why they are interesting, and showcase some of their potential use cases.

Perhaps the most notorious DAO so far was The DAO which launched in April 2016 as a decentralized venture capital fund. Members contributed ETH and received DAO tokens in return that could be used for voting on which projects the funds should be allocated to. It raised $150 million in ETH and was hacked with $60 million stolen. One interesting part is that even though the DAO is now defunct, anyone is still able to see all of the transactions that occurred since it is on a public blockchain and this record will never go away. Unfortunately the DAO hack temporarily left a negative impression or skepticism of the term DAO for many people but DAOs are an extremely powerful form of organizing and it didn’t take long to see a resurgence in DAO activity in the crypto space.

Crypto projects themselves can be considered DAOs if they are managed by decentralized governance where token holders can vote on the direction of the project or various parameter settings, rather than solely determined by a centralized team. For example, token holders of MakerDAO building a decentralized stablecoin are able to govern the system and vote on parameters such as fees charged.

Another example is Curve DAO building an automated market maker (AMM) that generates fees and provides revenue sharing for token holders that lock their tokens. The longer the Curve token (CRV) is locked for, the greater the amount of voting power and rewards received for the DAO member. Unlike traditional companies where profits are paid out pro rata, this DAO is setup such that voting power and revenue share is weighted according to the length of time a token holder has remained invested. 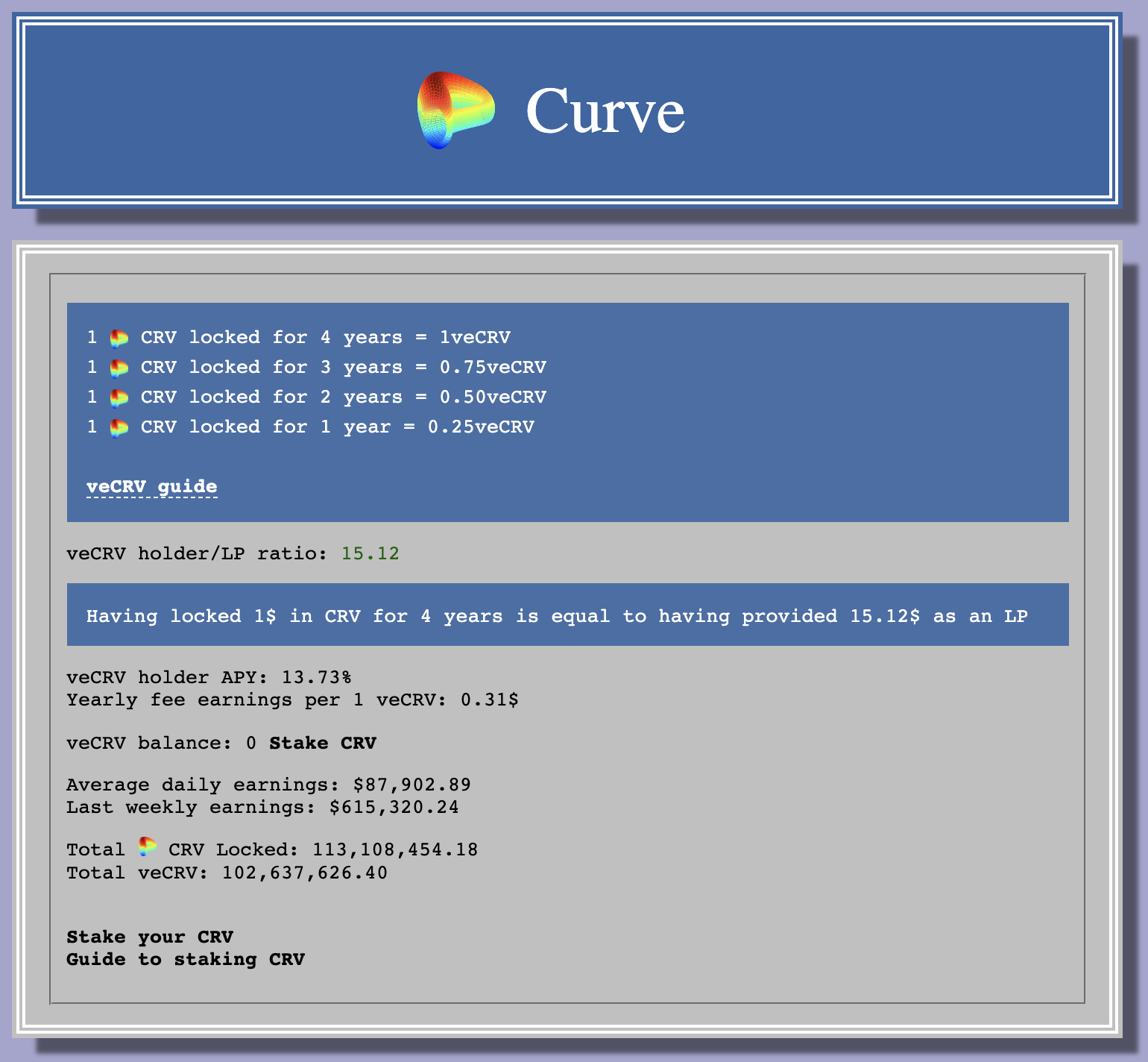 A DAO's assets can be controlled by stakeholders directly via a token. Stakeholders can be pseudonymous and based anywhere in the world. These pseudonymous stakeholders can come together to allocate a DAO's assets for anything, including to hire employees. This is something that is happening today. DAOs, consisting of hundreds of known and pseudonymous members, have legitimately hired employees based on community reputation alone. For example the Empty Set Dollar (ESD) DAO is paying a $180,000 salary to its community manager Lewi who said this was the highest salary role of his career. Other blockchains like Tezos and Decred have also had this type of system in place for rewarding contributors for their work.

We have seen a number of DAOs created for the purpose of funding investments or grants. Moloch DAO is a DAO that awards grants to advance the Ethereum ecosystem. They also allow people to withdraw funds in a “ragequit” if they do not agree with the overall decisions of the DAO. MolochDAO’s contracts have been forked many times to create other DAOs. MetaCartel Ventures is a for-profit fund that invests in dapps and is an early investor in many prominent crypto projects including Zapper and Rai. Members consist of experienced builders in the crypto community. Similarly, The LAO is another DAO made up of Ethereum enthusiasts that has invested early on in projects including Boardroom and Aavegotchi. MetaCartel Ventures and The LAO are both examples of DAOs that have strong access to deal flow in the crypto ecosystem on par or sometimes even greater than many venture funds as founders want to work with the DAO members and the DAO itself represents the ethos of crypto.

We’ve also seen DAOs emerge that are catered for more specific investment opportunities such as owning NFT art and virtual gaming items. Yield Guild Games is a play-to-earn gaming guild that is turning gamers into investors by buying NFTs in games like Axie Infinity, League of Kingdoms, and The Sandbox. 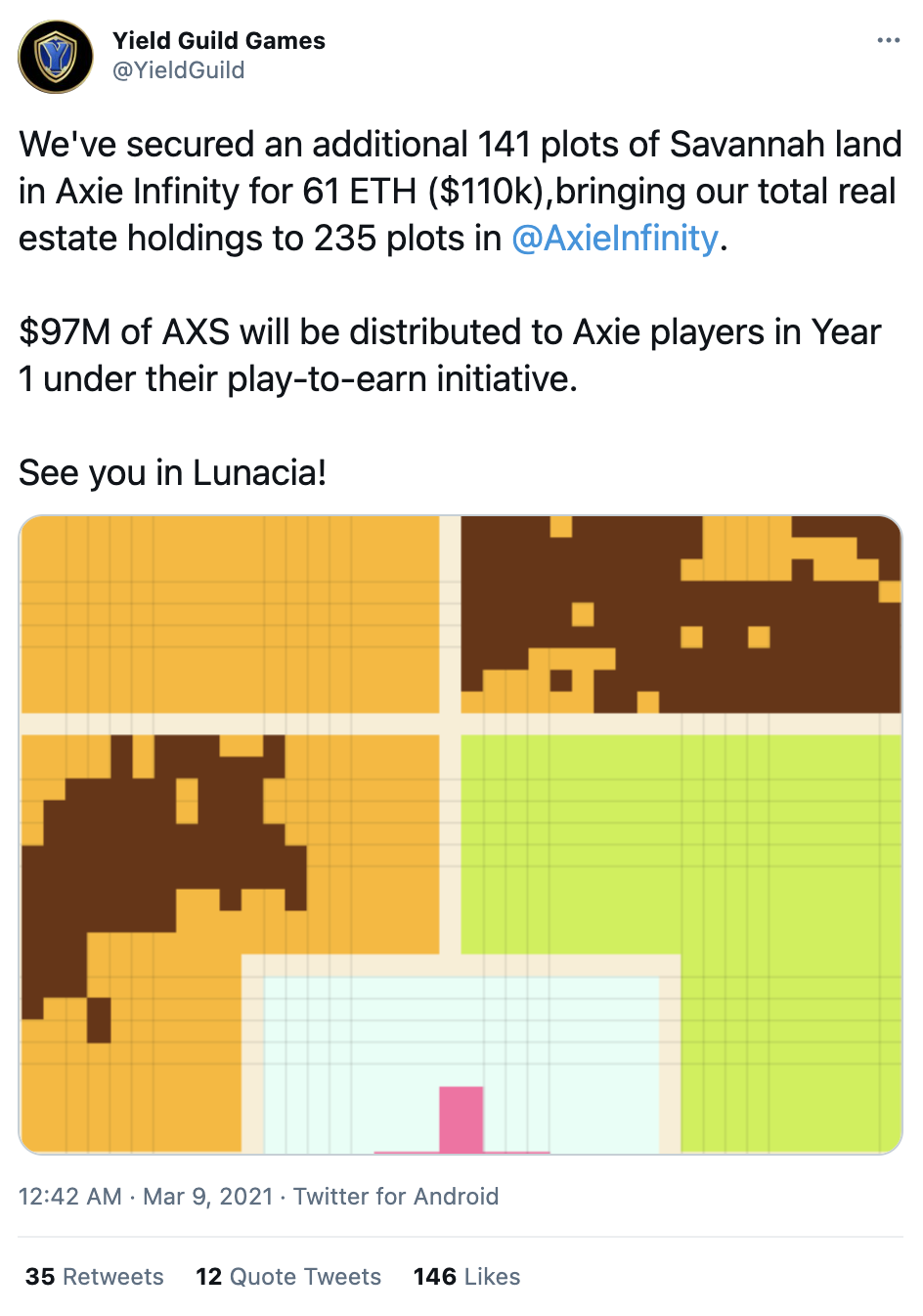 FlamingoDAO is a for-profit, NFT focused DAO. They have been actively investing in NFTs and made news when they paid $762k in ETH for a rare CryptoPunk NFT. 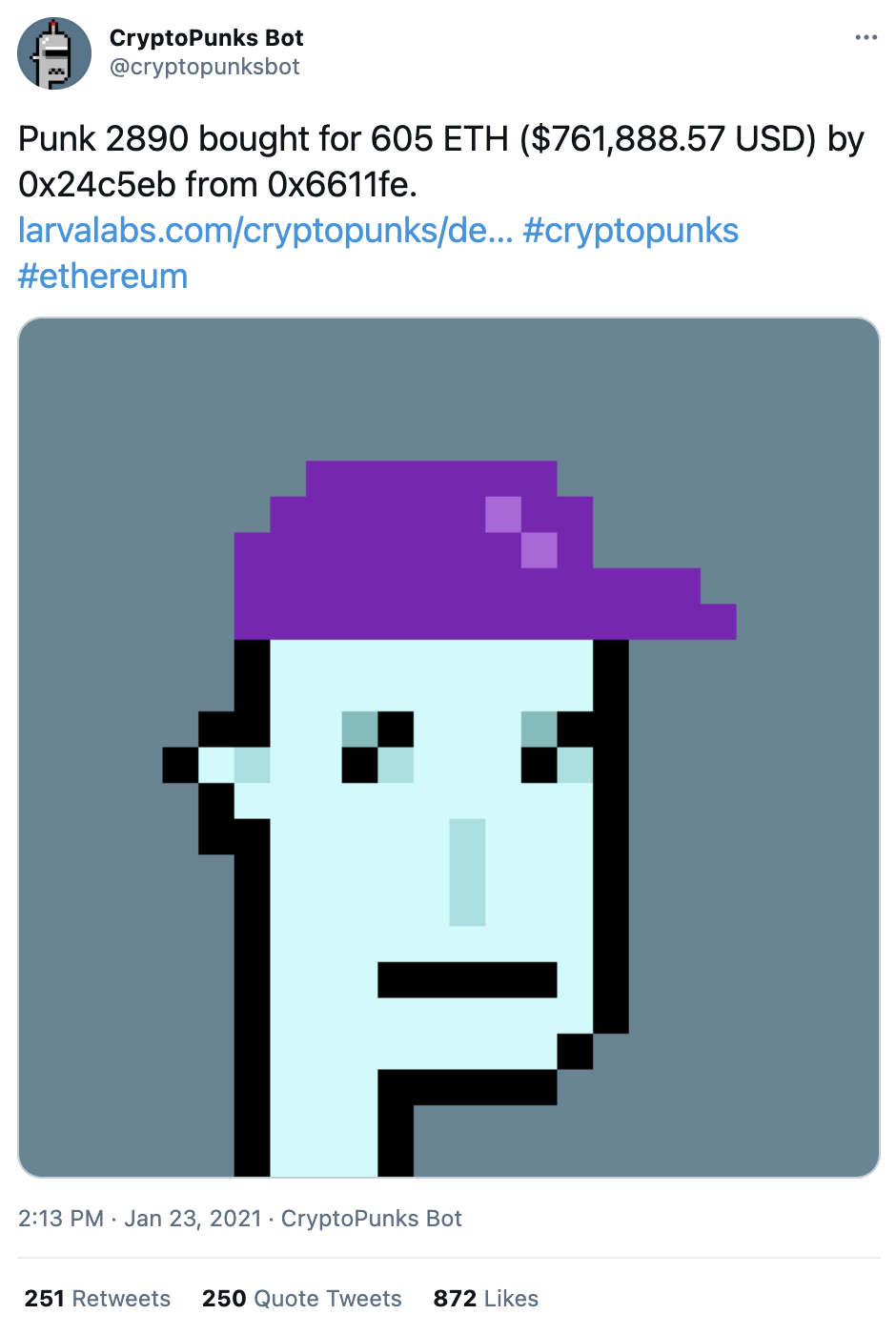 There are also DAOs that are organized around work such as Raid Guild which is a decentralized collective of builders and designers available to work on products in the crypto space and MetaFactory organized around fashion and culture that sells products they create.

There are a number of tools built for creating and coordinating DAOs such as Aragon, DAOStack, DAOhaus, Llama, and MyCo so that members do not have to build everything from scratch. 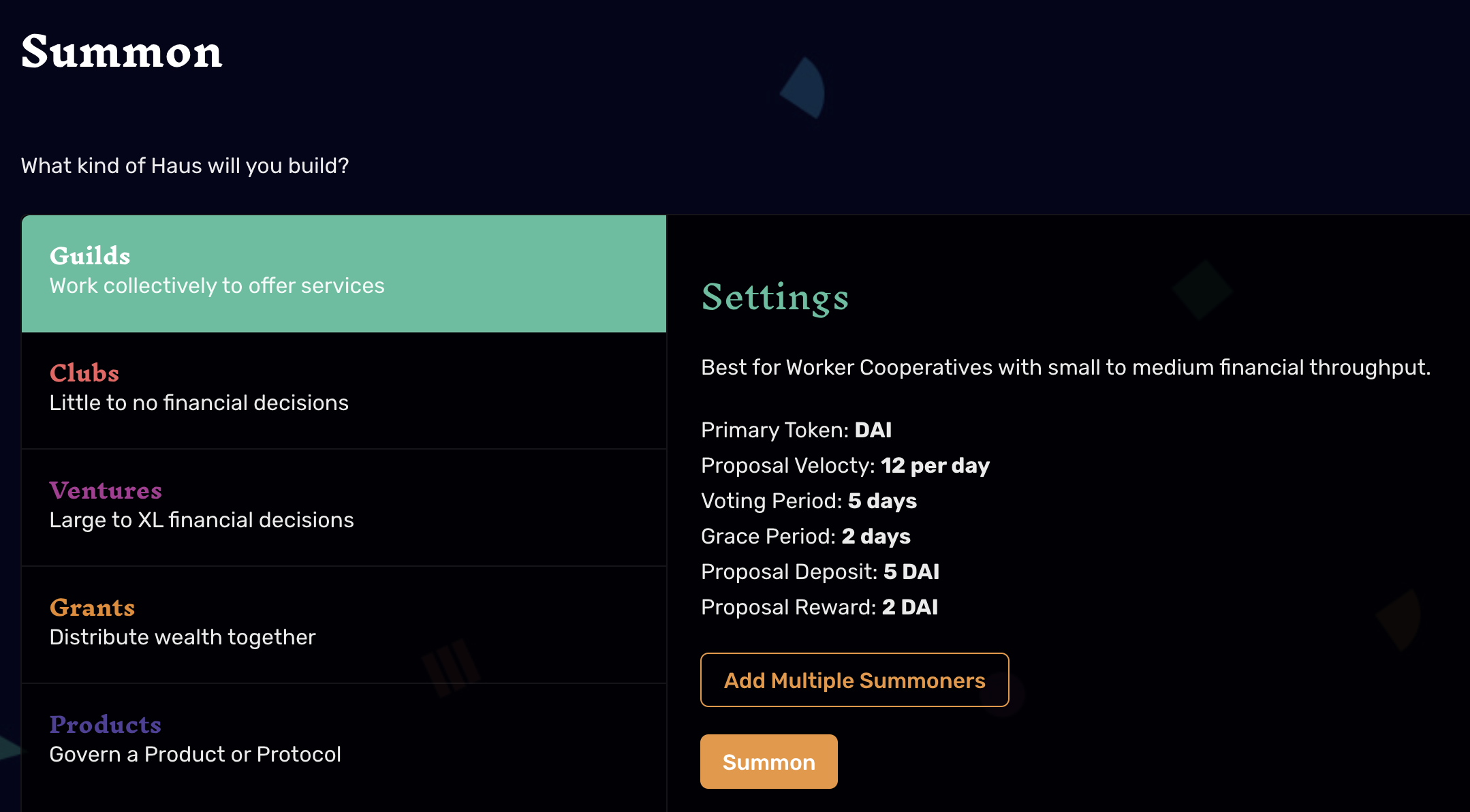 There are also tools like Snapshot that specifically manage proposals for voting by token holders, making it easy to see relevant details of the proposal and the status of the vote. 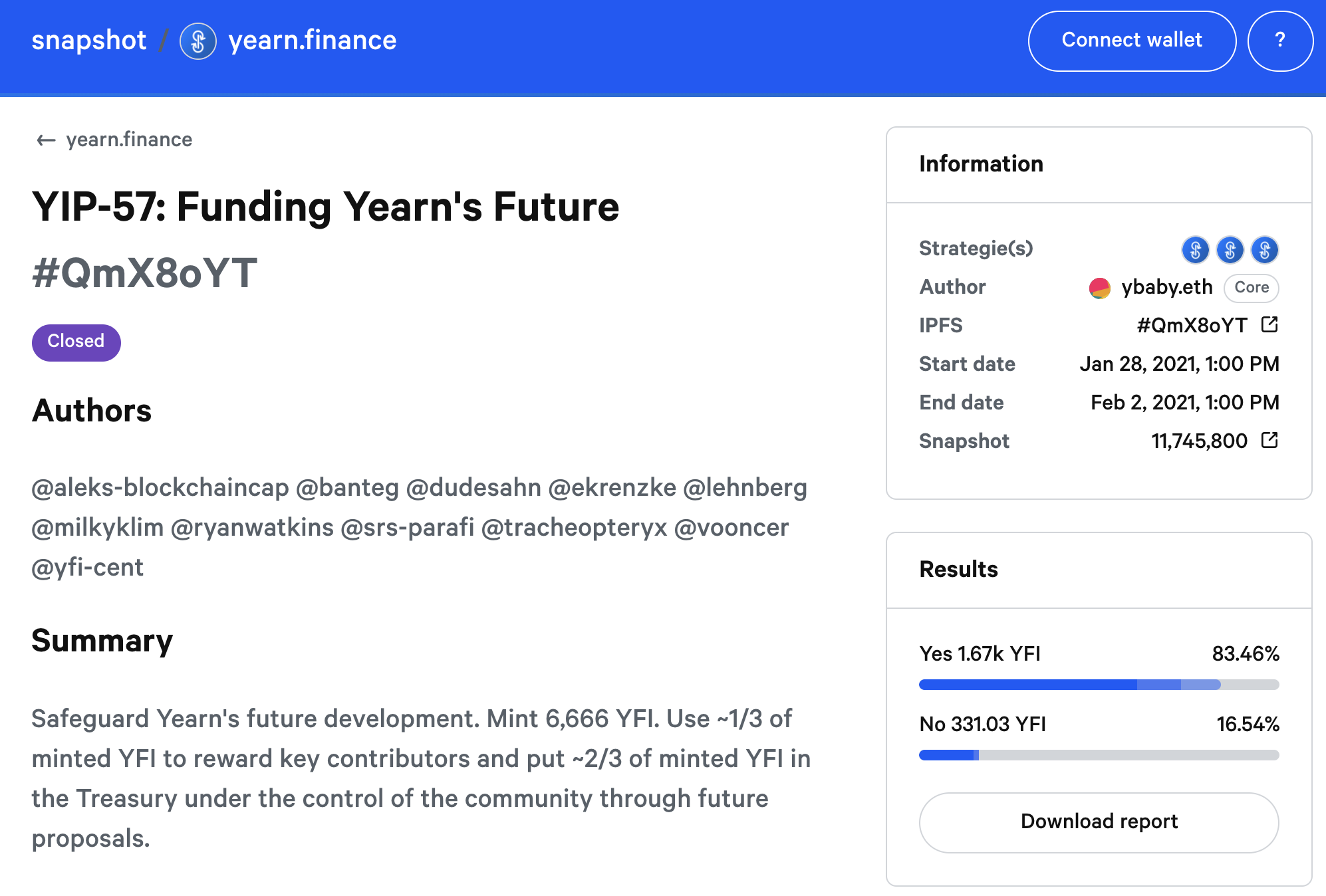 There are even projects where you can buy and sell governance votes such as Automata. This concept can be controversial as it might lead to those with large amounts of capital being able to control the votes but I think the creation of these types of borrowing and lending systems will be inevitable and will only lead projects to harden their governance system.

On the metrics side there is Deep DAO for keeping track of the DAO ecosystem. It isn’t necessarily comprehensive but it is interesting to see metrics such as number of members, proposals, and voter participation. 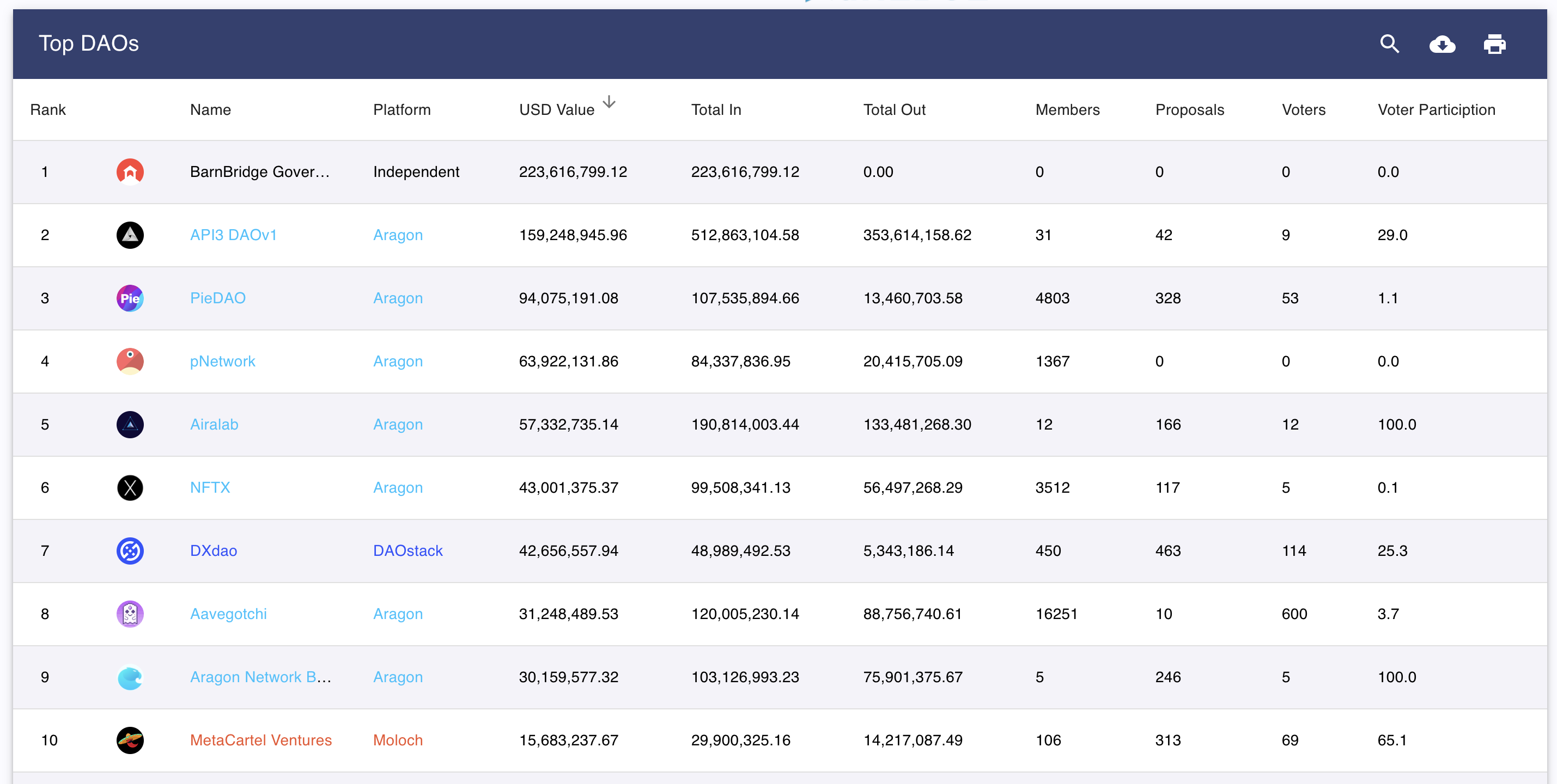 There are a ton of interesting use cases for DAOs and we are only just at the start of the design space. With DAOs, we’ll be able to experiment with governance systems at a rapid pace to quickly improve on what works and what doesn’t. For example, there could be a DAO that uses futarchy for decision making which would consist of members betting in prediction markets and then using the outcome of those markets to determine the action.

We will also see meta-governance when DAOs themselves serve a number of different protocols and receive governance tokens in return. DAOs will start voting and acting as delegators in other DAOs.

One possible use case is a DAO where all members are anonymous and can build up reputation in the DAO without having to reveal their identity. This allows members to be on a more even playing field and makes it easier for DAOs to reward individual contributors rather than possibly catering to higher profile members with a large following already.

Another interesting use case for DAOs is owning collective NFT art where each member can vote on different attributes of a piece of art and have the overall art piece change depending on individual attributes.

DAOs are powerful ways to organize but there may be potential issues with them and they aren’t the ideal system for everything. While DAOs can replace aspects of legal contracts with code and save a tremendous amount of operational overhead, in some cases there are no legal protections outside of the rules outlined by the smart contracts facilitating the DAO. This can create issues if control of the DAO is centralized or vaguely defined, although some DAOs may also form legal entities behind the DAOs themselves. There was also a Wyoming DAO bill passed through the Wyoming Senate committee that would help with the creation of legally recognized DAOs.

Depending on how the DAO is set up, it might be more difficult to coordinate and move quickly compared to centralized leadership like a CEO making quick decisions when necessary. However, a DAO could set up quorums that don’t take too long and set requirements as to how responsive DAO members need to be. Also in the beginning when there are a lot of decisions to be made, there could be more centralization among certain members and then the DAO decentralizes over time in what is referred to as “progressive decentralization.”

There is also the possibility of voter apathy where not all members will want to vote or are even best qualified to vote on all changes. In this case there will likely be voters delegating to members that can be more informed and active in voting that also align with their beliefs. These representatives are sometimes referred to as protocol politicians as they often campaign for delegated votes by members in the DAO similar to how existing politicians do. We might have the emergence of protocol lobbying groups that try to influence these politicians’ decisions. On the flip side one day we might even see DAOs lobbying and be major political institutions in society themselves.

Another issue is that by having the membership be so open, it is possible that it could lead to lower quality and higher noise within the DAO but these can be addressed through DAO screening processes or minimum token holding amounts to at least make sure the participant has skin in the game and is incentivized to see the DAO succeed.

Here is an additional resource to understand DAOs further:

If you want to get in touch about interesting DAO ideas or projects, I’m @ljxie on Twitter.

Thanks to Will Warren, Jordan Clifford, and Brian Flynn for reviewing this post.

Disclaimer: Linda Xie is a Managing Director of Scalar Capital Management, LLC, an investment manager focused on cryptoassets which holds ETH and Ethereum tokens. This post is not investment advice.