At 8:24PM EST tonight – sunset NYC – June 5th 2021 - the custom smart contract, Exodus 2, developed with the invaluable assistance of Billy Rennenkamp, Everett Williams and Dan DeNorch at Folia, will initiate an unlock on the first of 19 X2 tokens. Each unlock triggers a 24 hour open auction on each X2 token. The unlocks will continue sequentially in a reverse Fibonacci sequence for the next 40 years, and finish on June 5, 2061. Each token contains the text of a poem, which is both encoded on-chain as part of the contract, and rendered visually in its own custom typeface. 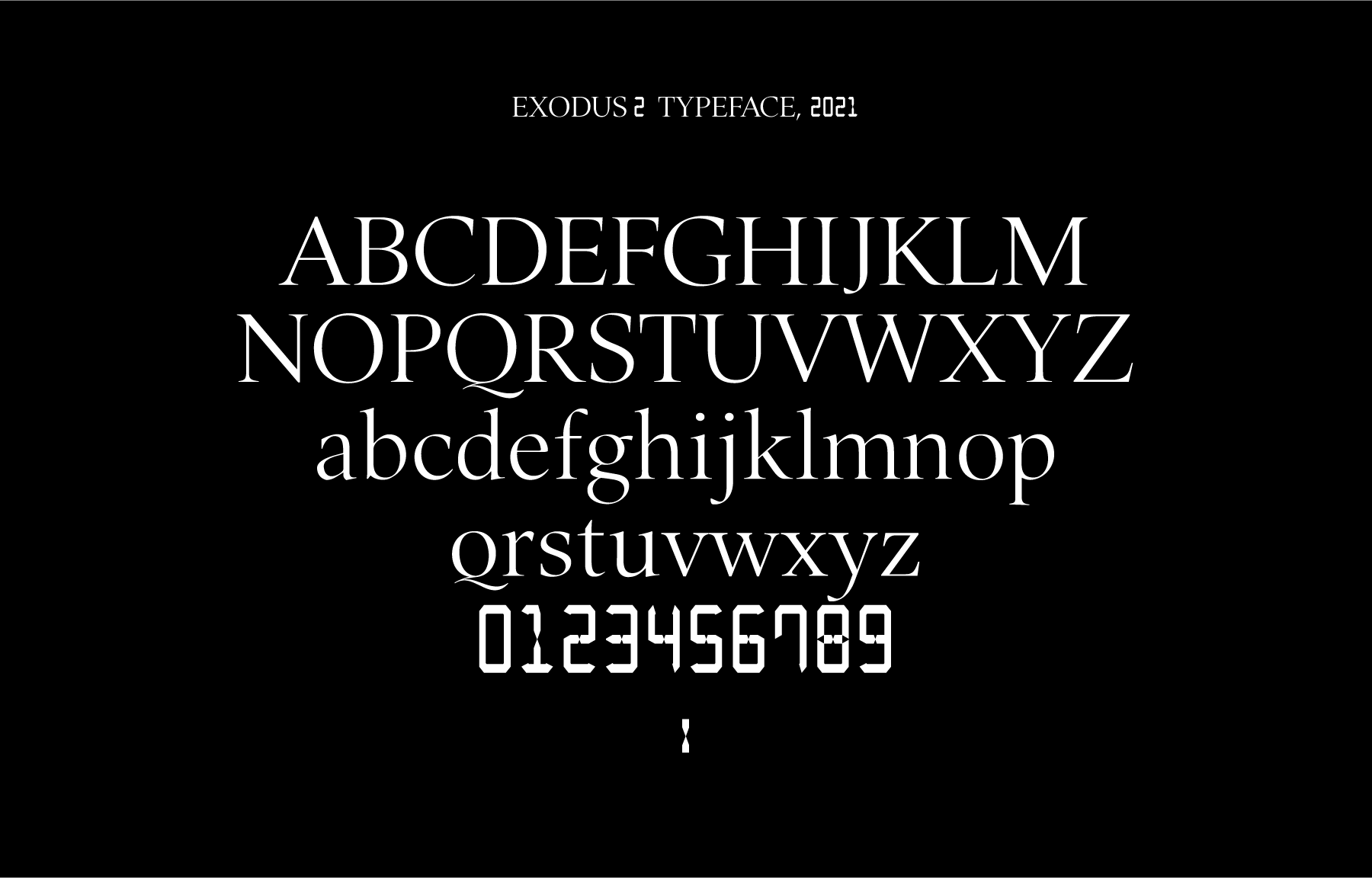 The poems were written sporadically in 2010 and 2011. They are 19 pangram haikus; a tricky combination of formats that grew to mean the world to me. A haiku is a poem of 3 lines, containing 5, 7, and 5 syllables. A pangram is a sentence that contains every letter of the alphabet. At first, I wasn't sure if I could even complete a single one that satisfied both constraints. One grew to 19 that form a single, sprawling journey through my hopes and fears of this moment, of language, code and time.

19 poems can be viewed and read in sequence on Folia here, or on opensea here.

The 19 are the foundational point of my graphic practice – the reason I began to draw type, create typefaces, as a component of every work I made. Reading a pangram haiku is a war between two modes of recognition; the part of the viewer that wants to parse the image and meaning from the text and read it as a poem, and the part that can’t help but count the syllables in each line, or count out each of the 26 letters to make sure they are present, and check it as data. Somehow separate from these is a third mode; a voice, encoded in the type form. We’ve yet to truly quantify how any of these elements work. Perhaps in the 40 year lifespan of the work, we will. The fact we haven’t yet makes these fundamental elements of language feel secretly high-tech to me.

They were written about a rubicon I felt our generation would cross in our lifetime; that I think we are crossing now. Where the collective dream of the default bedrock of our world is no longer infinite, experiential, but finite; code-based. An exchange of a soft sublime for a new, hard, incompatible one.

What pushes us across this line that the texts attempt to speak to, is simply time. The coming of the inevitable point where more people exist for whom the dominant weight of value in their lives is no longer physical, but tied to a digital source. Where their default notions of identity, value, community, image, text, currency, ideas of past and future, are drawn from digital space. Many of you will already be reading this text.

Our moment is one of flux as a result. All texts and all art offer themselves before two readers, two value systems, perhaps incompatible, and struggle to make sense of our time and how to move forward. I've wanted to find ways for over a decade to find what language might exist that allows work to feel valuable to both those viewers, to function as a site of exchange and dialogue between them.

I was born in 1986 – in one of the gaps in human history where reality was not assumed to have a universal ledger – after God but before the blockchain – and grew up with defaults from before a persistent digital realm. I feel the excitement of the new, but also a dread, as the clock races forward and things of once of deep value suddenly seem obsolete, or uninteresting to a new generation of viewer. One thing is certain; we cannot call a time-out, we do not have liberty to pause to take stock of what we stand to lose. New viewers are born every moment whose defaults are the defaults of the age we have built. The future is theirs and the generations after them. Clock only go one way. All we can do is try to place work in front of them in the timeline to come.

You can read these works as a string of data; all the letters in the alphabet, arranged in the haiku, encoded onto the blockchain, units of information, atomized. A data sculpture, all units visible.

Or you can read them as a poem; their nostalgic mode, what the language was once used for; components becoming invisible in service of an imaginary other; myths, images, meaning.

The poems are a time gambit. They sit at the lenticular flux of the point between the two generations, between nostalgia and the future. Maybe some themes and motifs will become more recognisable in time to some readers. Or maybe they are on a doomed voyage; they will grow boring and irrelevant, or some aspect of the underlying tech will never reach their final unlock, crashing. What technological defaults are readily accessible today that survived the last 40 years? Who reading this will still be here to read the last unlock, let alone care to do so?

Its more in the hands of the reader and collector than mine now. The chain and contract carries the work from this point, to their next destination. I hope to some they or individual parts of them will become oracles, charms, familiar companions on their journey, strange signifiers of our strange days. On the site there is a CALENDAR+ link in the top right. It will automatically populate a Google calendar with the unlock dates that will send you the text of each poem as it unlocks between now and 2061.

The contract has been written to unlock the first token automatically at 8:24PM EST 2021. Which is tonight, sunset. Sunset tonight is also the end of the day of the 25th Sivan, in the year 5781, in the Jewish calendar. For the entire work to complete, the Ethereum blockchain only has to survive for 40 more years, which is a humble target for a supposedly highly advanced technology when compared to the numbers on the board of rudimentary text-based protocols like Judaism, which is claiming 5781 and counting.

At the final unlock, on June 5th, 2061, I will be 75 years old. It is a fair estimate of the terminus point of my lifespan. I chose the 25th Sivan 5781 and the 5th June 2021 as the start date to coincide with the reading of the text of parsha Shelach Lecha, from the book of Numbers. In it, God condemns the Israelites to wander the desert aimlessly for 40 years. Spoiler warning: they don't survive, but the protocol and the text they carry does.