Yesterday, in partnership with Metagame, we launched a collection of upgradeable NFTs for members of the Llama community. Llama contributors will be able to mint their NFTs on the Llama platform. Today, we’d like to share some more about how the NFTs will work and what they could unlock for our community. 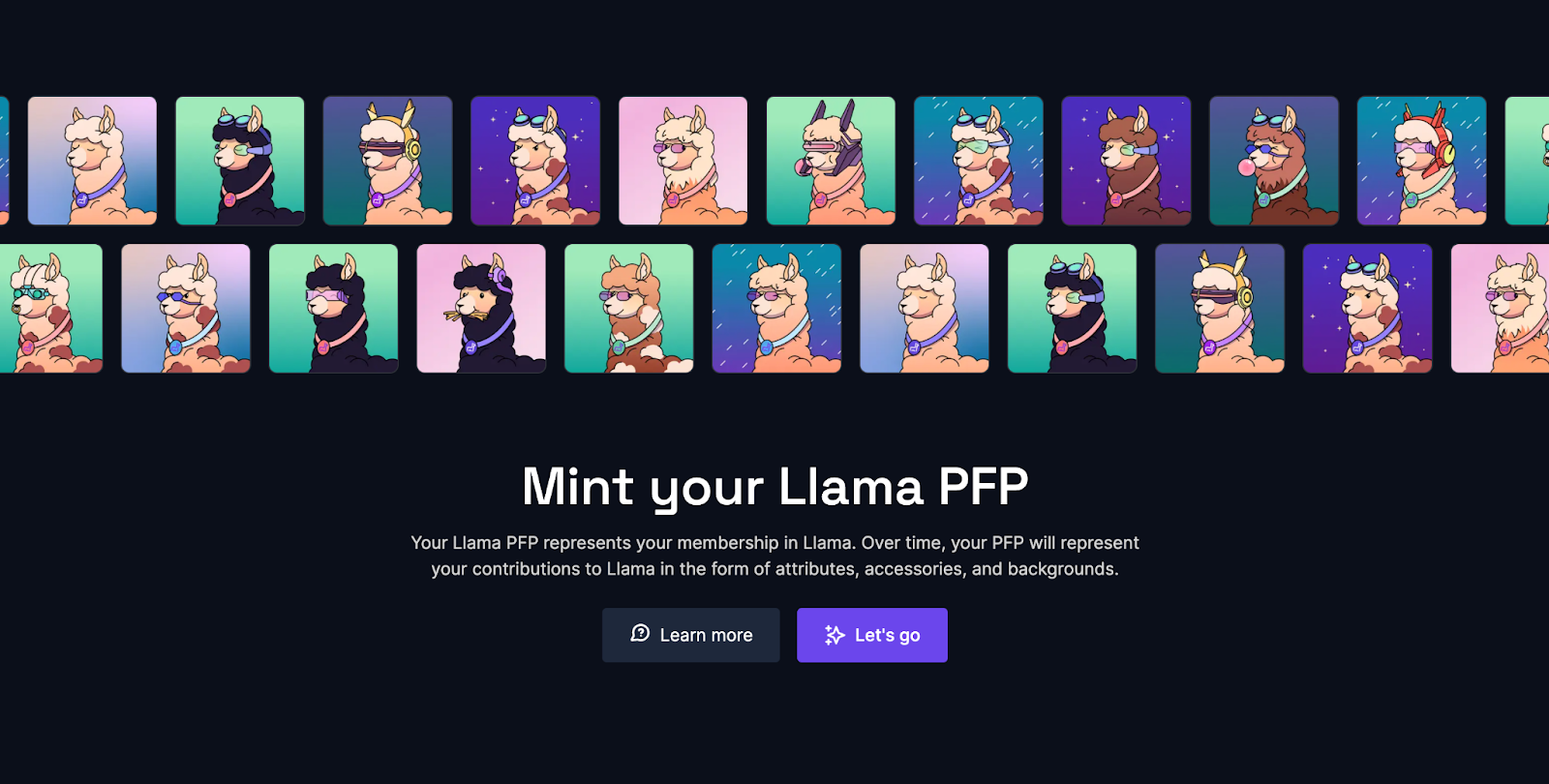 At first glance, Llama NFTs may look like simple, static PFPs, but they represent much more than that. They serve two primary purposes:

First, we wanted to create a fun, visual, on-chain representation of membership to Llama. We designed the Llama avatars to be playful and futuristic, echoing our optimism about the future of the work we’re doing at Llama. We wanted the artwork to be easily identifiable so that others could come to recognize our contributors as members of Llama.

Since the Llama community began, we’ve worked with some of the top protocol DAOs, including Aave, Uniswap, and Nouns. We’re proud of the work we’ve done with these protocols. The Llama NFT collection is an on-chain memorial of this work and belongs to those who made it all possible: our community.

Each Llama contributor will receive a llama NFT with a unique combination of fur color and eye style, which are selected by the contributor and remain a permanent part of their NFT. At launch, we have 48 possible combinations of fur color and eye style. As the community grows, we’ll add new traits and colors to increase the number of unique llamas.

As the NFT represents membership in Llama, it was important that the NFT remain tied to the contributor’s wallet. For this reason, we made the NFT a non-transferable (soulbound) token. However, we realized we also needed some flexibility to allow transfers in case a user needs to change their wallet in the future. The smart contracts governing the NFT allow the Llama multisig to approve transfers to new contributor addresses.

One of the primary goals of the NFT project was to capture a llama’s contributions over time and reflect those contributions on-chain. For this reason, the NFT was made upgradeable, with different traits unlocked by different levels of contribution and experience at Llama.

We have a total of 5 upgradeable traits, all of which will represent different types or levels of contributions within Llama. 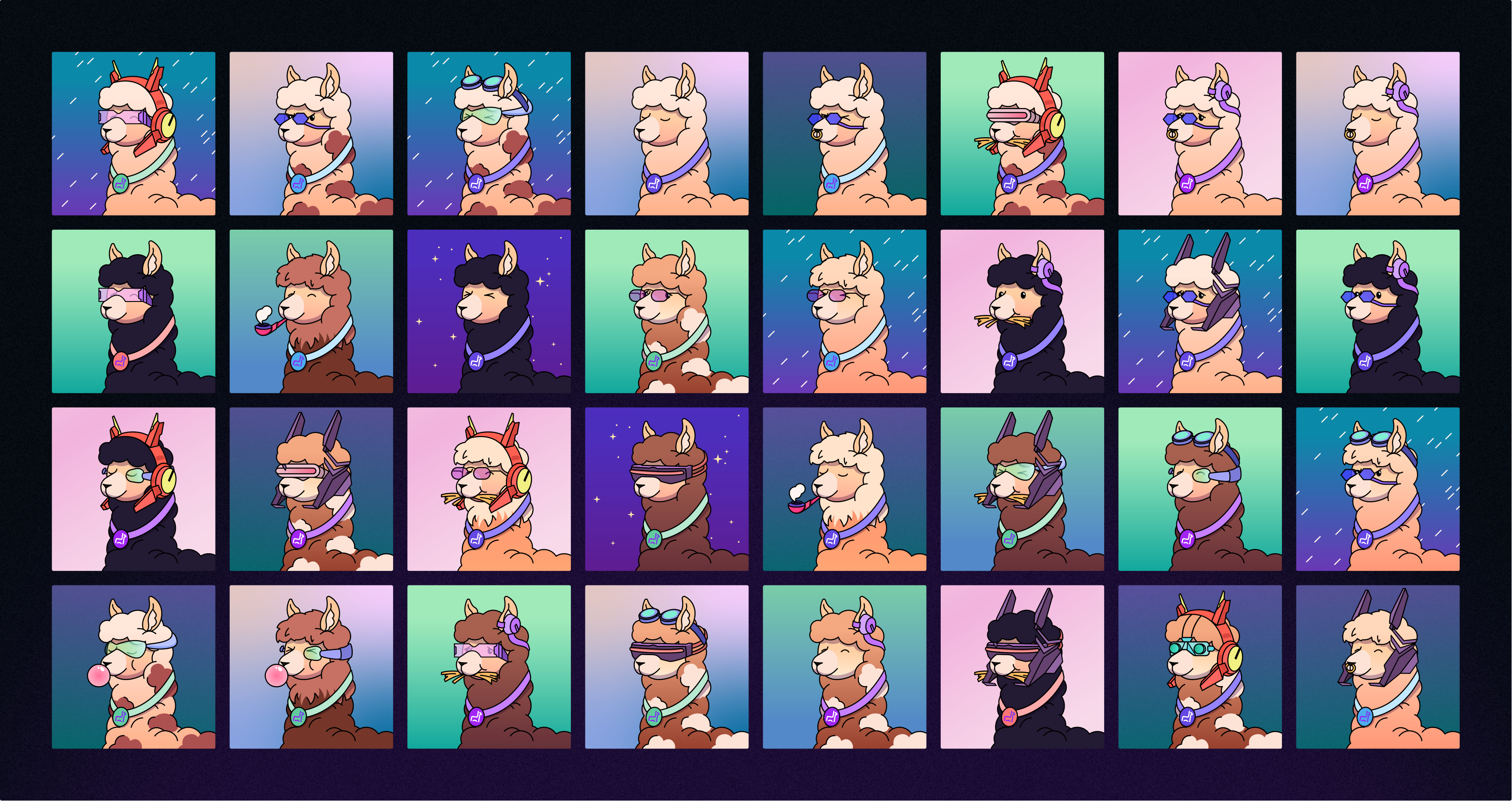 The background trait, for example, represents a llama’s level of context and experience in the community. Our community design is composed of 4 levels and draws inspiration from llamas in the Andes: Travelers, Explorers, Mountaineers, and Ranchers. A new llama enters the community as a Traveler and, after spending more time contributing to Llama, they progress to Explorer, then Mountaineer, and finally Rancher. A llama’s journey is a lifelong one; we’re always at the beginning and we’re always climbing. 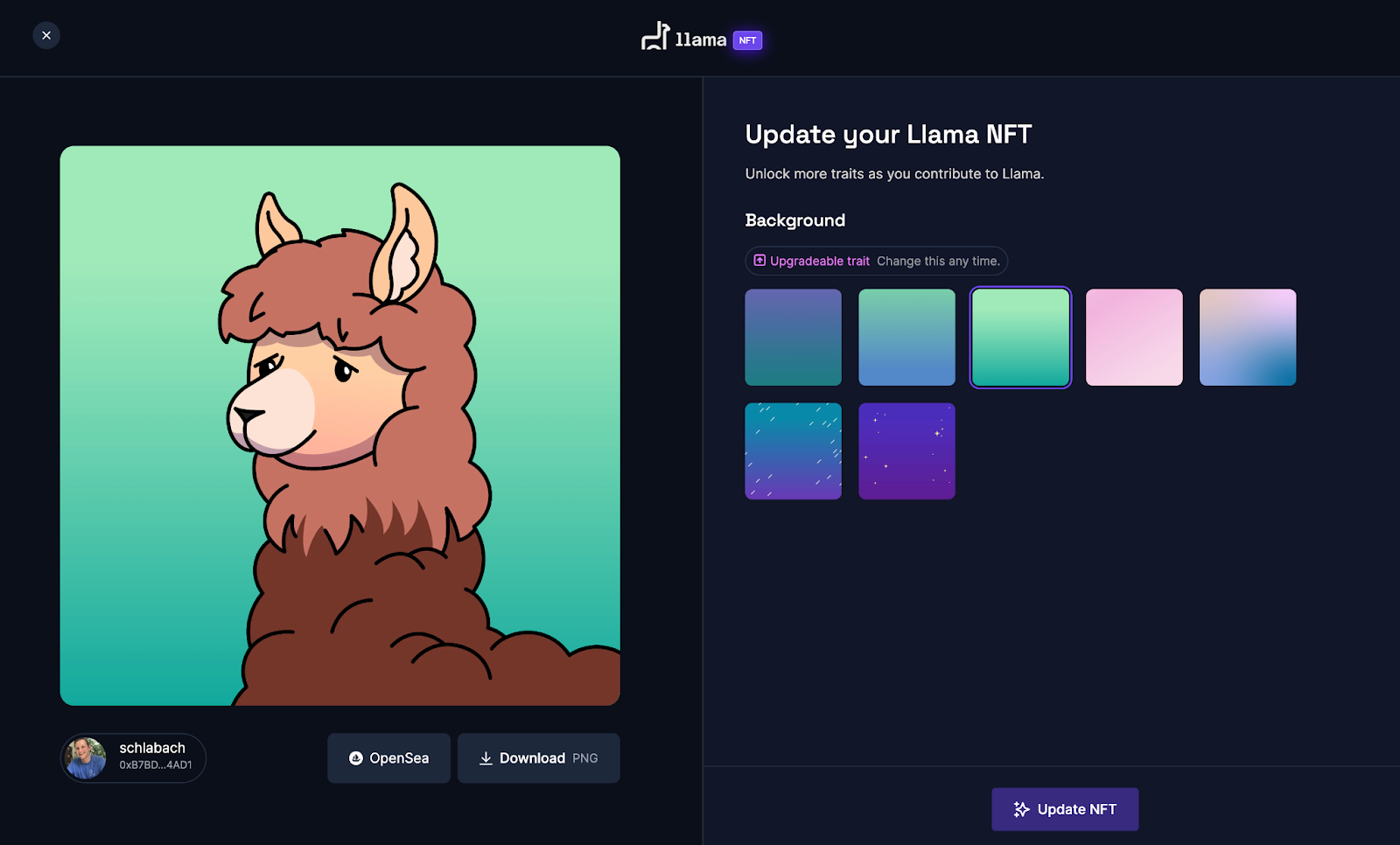 At launch, the background trait is the sole upgradeable trait. Incentive systems are hard to get right, and we wanted to launch with a simple but meaningful trait that’s well established within our community.

A llama’s level is intended to be a holistic representation of a llama’s contributions over time. Some of these contributions are hard to incentivize on a granular level, such as answering questions in the Discord server or jumping on calls to help other llamas when they get stuck. These types of actions are incredibly valuable for the health of the community, but they’re hard to incentivize and record without running into Goodhart’s Law (when a measure becomes a target, it ceases to be a good measure).

Over time, we’ll use the remaining traits (ears, glasses, mouth, necklaces) to represent other accomplishments or contributions to Llama. These might be things such as:

Llama contributors are able to mint their NFTs through the Llama platform. This platform is home to all of Llama’s onboarding guides, documentation, notes, and internal tools. As the needs of our community grow, we’ll be able to evolve with those needs and reflect them in the Llama platform.

These Llama avatars are an important part of the platform; over time, PFPs will not only be upgradeable, but will also be interactive. Other community members will easily be able to tell what different traits represent by hovering over someone else’s PFP.

In the future, these avatars may also allow us to permission-gate different internal tools. As Llama becomes a larger contributor DAO, many more llamas may join the community. If certain tools or features require higher context, experience, or trust, they could be gated based on the avatar attributes a Llama has earned.

While Llama already had an internal platform on which to host the minting and updating functionality, Metagame provides the tooling, infrastructure, and smart contracts to map contributions and participation to traits. Working with the Metagame team allowed us to tailor the solution to the needs of our community - we needed a flexible starting point that allowed us to define other upgradeable attributes in the future, as well as the infrastructure to manage the minting, upgrading, and transferring process.

Metagame is looking for more communities to beta test their new Earnable Avatar Studio. Please reach out to @brennerspear (brenner@themetagame.xyz) if you and your community are interested.

View the full collection on OpenSea.

Stay Up to Date on Llama 🦙

Many thanks to grossehalbuer for the artwork for our NFTs and to @alexkayaian for the UI design!

DAO Strategic Partnerships: A Community-Centric ApproachThe Great Convergence: $GHO and the Story of the Five Old KingsDeeper Data, Dune and Beyond: On-chain Analytics with Llama Private Rounds or Public Auctions? Fundraising in the Age of the DAOEconomic Infrastructure for DAOs