The Magic of Interop Hacking

Marketers experimenting in web3 have an incredible tool at their disposal that has not yet been fully explored; there’s a massive opportunity to profit from the hard work of their competitors and potentially seize relevant new audiences at a fraction of the cost paid by the competition.

Thanks to the advent of public blockchains, a wealth of data abounds around transactions, holdings, wealth, and identity — all for free! As more brands move to deploy digital assets on-chain, they are creating a mountain of customer data that anyone can access without burdensome effort.

Using that data associated with who owns how many of what for how long sitting out in the open, it’s possible to deploy experiences specific to that data in multiple places. This is a principle known as interoperability, which essentially means that what’s good for the goose is good for the gander. If it works on one website and works on another website, then it’s interoperable.

Some examples of interoperability pre-web3 include single sign-on systems (SSO), such as signing in with Google or Facebook, and phone numbers, which can work no matter the service provider or device being used. These systems use open or semi-open standards, which anyone can read and build experiences on top of.

With blockchains’ public ledgers, the notion of interoperability is taking a massive leap forward. It’s already at work with the allowlist meta that has long dominated minting periods for new projects. All of that open data paired with perfectly open standards lowers the barrier to entry for all and produces fertile ground for innovation.

And a touch of piracy. 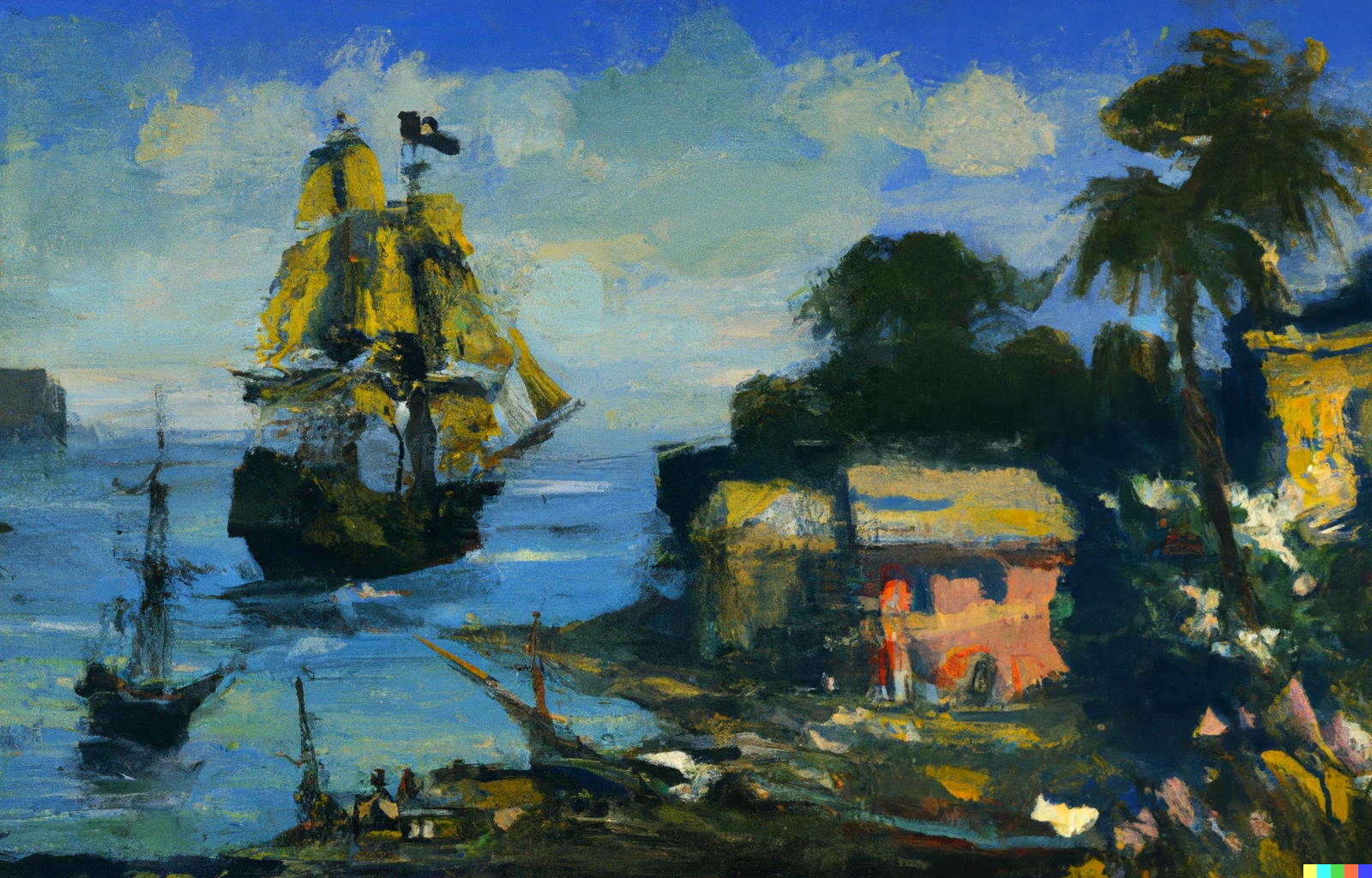 Several communities and brands have done the work of assembling loyal cohorts through the ownership of digital assets, all of which is visible to everyone via the blockchain. Cool Cats, Deadfellaz, Liquid Death’s Murder Head Death Club, RTFKT — all vibrant and united through the ownership of a non-fungible token (NFT) built on a shared identity, culture, or ethos.

Alas, that loyalty and exclusive access to attention is potentially less resilient than originally thought due to a new tactic enabled by the public ledger: introducing the interoperability hack (or “interop hack” if you want to sound cooler at a post-conference happy hour).

Inside the Interop Hack

How does this newfangled interop hack work?

First, some diligent person or group out there does the good work of assembling a community of people under a specific banner, whether it’s a preexisting brand or fresh one made from scratch. This is happening organically all the time, so vigilance and research are required to spot the right group to target with the hack.

Next, the enterprising attention burglar seeking a new audience scopes out the target communities, measures their interest in the new opportunity, and sets up tracking workflows while building commences.

The would-be burglar must now build the offering: a skin in a game or virtual world, a discount for e-commerce purchases or mints, access to premium content, and so on.

Once construction is complete and the offering is ready for consumption by the target audience, the burglar now needs to cleverly communicate the free offering to the target audience. “Congratulations for holding or minting X, you can now enjoy free shizz in my new (game/storefront/world/library/dungeon)!” 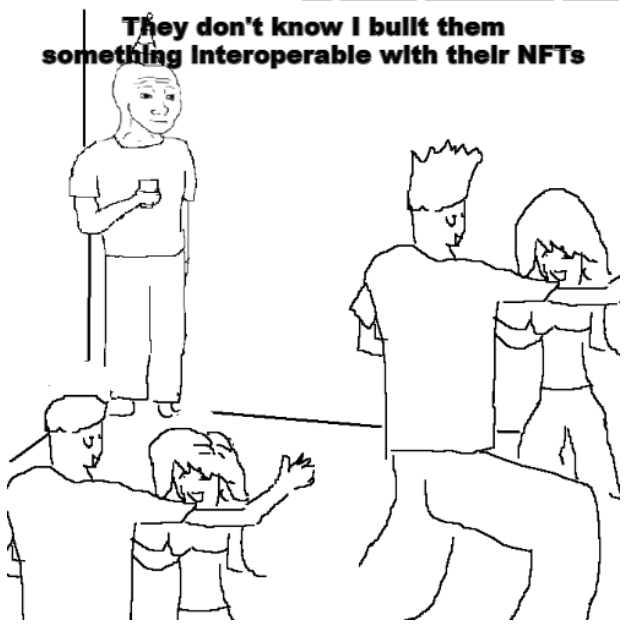 The reason it’s called the interop hack is this is designed as a method to drop a large quantity of relevant, probably well-capitalized consumers into a new product offering in one fell swoop, ideally with their friends and associates who can help smooth out the onboarding process.

In a different framing, think of it like a new shoe company giving its latest products to a sports team (who all wear the same uniform, don’t forget!) to try out and rep on the field or court. As the team breaks in these new shoes, the players can give each other pointers on how they’re lacing up the shoes, how they’re stretching them out, what insoles they use for extra support, and the like.

Leveraging the existing social fabric between the teammates and holders would enable the enterpriser to enjoy a higher degree of retention than if traditional consumer acquisition was on the menu.

The final step to the interop hack is naturally establishing the retention-maximizing, controversy-minimizing fit between the product and this newly onboarded cohort, ideally in a product-community fit framework. This is still web3, after all.

Starbucks reaped a heaping ream of press coverage through the announcement of its new blockchain-enabled Odyssey loyalty program, which will be deployed on Polygon and allow customers to complete designated “quests” to earn redeemable, tradable “journey stamps.”

Much hay has been made of how Starbucks’s experience has obscured all of the technical details that plague the average wallet user and stripped away any mentions of tokens, chains, or anything related to the technical undercarriage of the endeavor.

To which, a resounding duh. Now the scores of millions of boomers addicted to caffeine can play games on their phones and become more consumed by the Starbucks brand without realizing they’re swapping tokens or initiating on-chain transactions.

It’s unclear if a blockchain nerd can crack open the app and get to the transaction schema on PolygonScan yet or if a decentralization maxi can use an independent wallet in the experience, but if someone finds the activity (and someone will), then the market will have some very valuable data to peruse.

The obvious coup here is that Polygon scooped up a massive corporate adopter and will enjoy high throughput on its network. But there’s another coup lurking in the shadows, waiting for the right person to seize the opportunity. 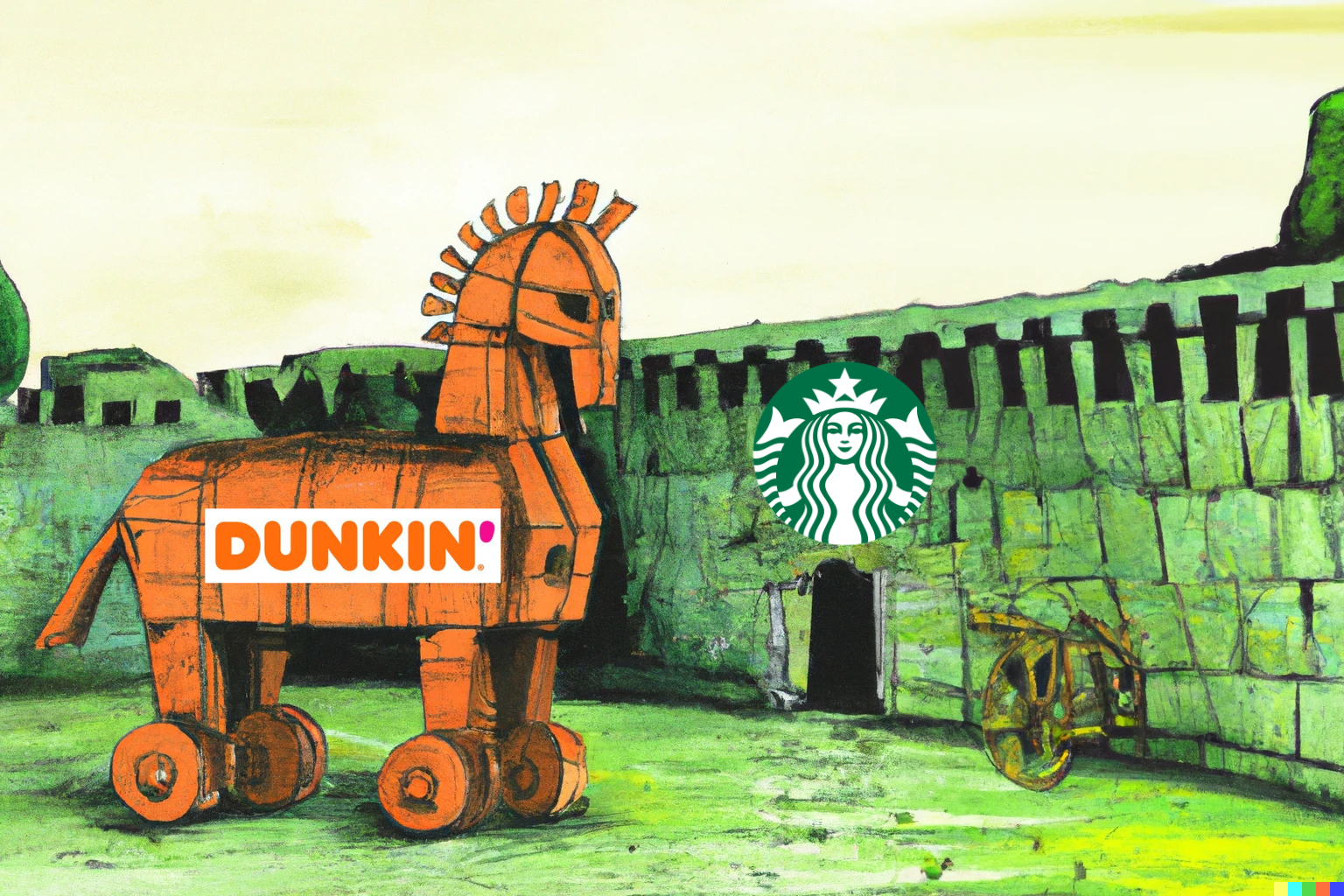 Now that Starbucks has taken a step into the light with Odyssey and validated the blockchain methodology for other Fortune 500 F&Bs, there’s little to stop a competitor like Dunkin launching the “Dunkin Iliad,” in which Dunkin deploys a Trojan horse that sucks all the value out of Starbucks’s efforts.

If the wallet address is ever exposed to the Odyssey consumer or consumers are able to collect the stamps in their own non-custodial wallets, then Dunkin would have the opportunity to build a competing web experience, the Dunkin Iliad, that could read the contents of those wallets and assign its own rewards accordingly. The higher someone’s level is in Starbucks Odyssey, the higher it could be in Dunkin Iliad, which would then offer its own games, discounts, content, and more to recruit and retain the new customers on the new experience.

Effectively, Dunkin could feasibly capture some attention and spending from a massive customer base aligned with a competitor, all without needing to do as much heavy lifting as Starbucks is doing to get Odyssey off the ground. With a few quote tweets and tweet replies on Odyssey-related tweets, Dunkin’s social media team could storm in and take away a ton of value from Starbucks’s new venture, much as the Greeks conned their way behind Troy’s walls with a giant wooden horse and slaughtered everyone.

Another optimal beneficiary of the interop hack would be web3 gaming companies, particularly the studios developing portfolios of blockchain-enabled games. In order to drive presales, downloads, in-app purchases, and all other objectives, games need people playing them, bottom line.

It’s common for game developers to give away in-game on platforms like Twitch Prime and some studios like Ubisoft have been known to offer limited edition cosmetics or usable items in one game based on the ownership of another game in the studio’s portfolio. 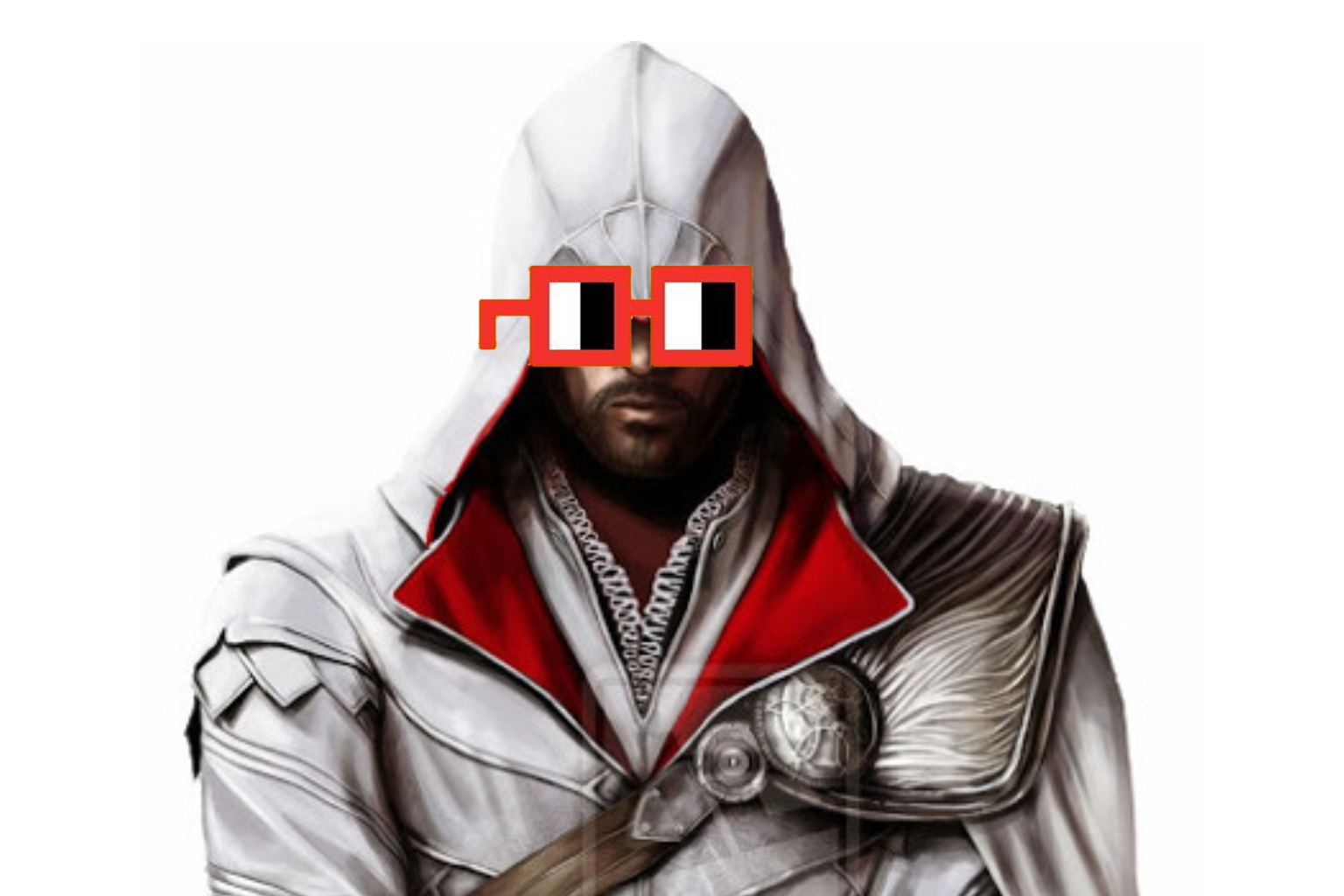 Web3 studios have a natural advantage to provide these kinds of growth hacks using interoperability. With token-backed assets, ownership is instantly verifiable and provable, so there’s no need to worry about a black market in redemption codes. And if the players’ experience is built right, they won’t need to worry about connecting a wallet either.

If one game is successful, then the studio should look to drop that community a benefit in the new game, whether a cosmetic or power-up, but tied specifically to the ownership of a token in the first game to prevent undue flipping. A successful interop hack would seed a new game with a brand-loyal cohort of players who can find each other and engage with new gameplay together, jumpstarting the new game’s culture and easing the onboarding for completely new players who may not fully understand the game or the ownership benefits.

For web3 gaming studio like Mythical Games, which recently launched multiplayer party game Blankos Block Party on the Epic Games Store (the first blockchain-enabled game to do so), could offer Blankos token holders exclusive Blankos-themed skins or items in its future games simply by reading the players’ wallets — no additional token drop needed, just a little marketing to the existing community.

For anyone looking to capture a pre-built community with the interop hack, there are a variety of avenues to get started, but doing this requires surgical precision and care so as not to roil an army of trolls in Twitter mentions, as most things in web3 tend to.

As long as the audience burglar doesn’t try to monetize any intellectual property (IP) it doesn’t own, then there should be little legal downside to creating an asset that remains in a database until activated by the corresponding holders. However, depending on the target community, there could be reputational downside to approaching the market aggressively or blindsiding the community’s leadership. Legal counsel should be consulted nonetheless! 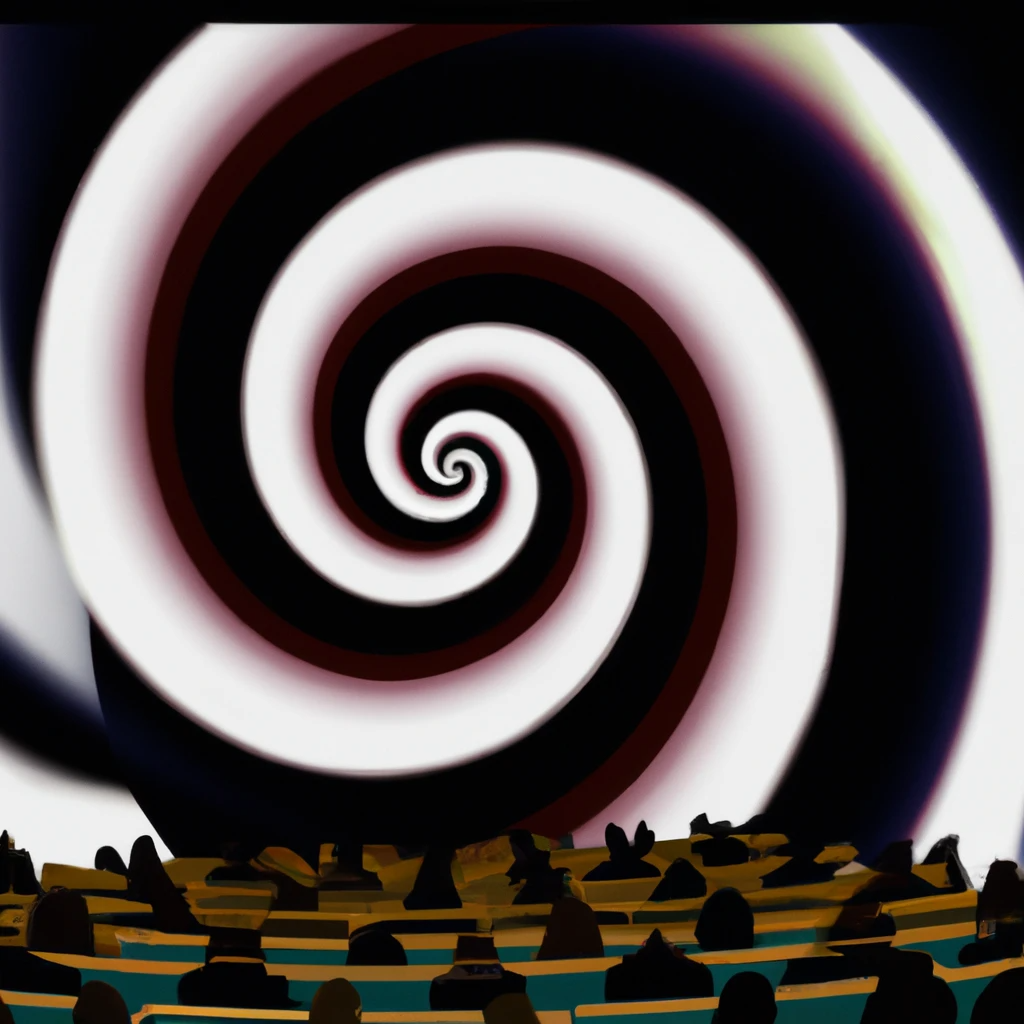 For attention burglars looking to start simpler with their interop hacks, they could work with IP licensed under the Creative Commons license with zero copyrights reserved (commonly styled as CC0), such as Nouns, Tiny Dinos, or Goblintown. If the messaging strikes the right tenor, the communities that have emerged around CC0 projects could become incredibly loyal cohorts for someone rewarding their passions with unique benefits.

In order to avoid the annoyances that come with issuing new tokens, the attention burglars would need to accept a certain degree of tradeoff around centralization, as would the beneficiaries of the interop hack. In the event of decentralization maxis trolling the announcement, communications should be deployed explaining the benefits of tying the benefit directly to the ownership of the original token, rather than dropping a second one.

As long as there’s cultural or thematic overlap between the new product and the extant community, interop hacks should go off rather smoothly. After all, it’s a mutual benefit: the new project earns new adoption, the community receives unbidden benefits, and the community’s leadership could look more visionary than they actually for delivering a surprise delight.

All this said, interop hacks could very easily lead to knife fights between brands venturing into web3 and the various other actors looking to peddle in influence and connection. 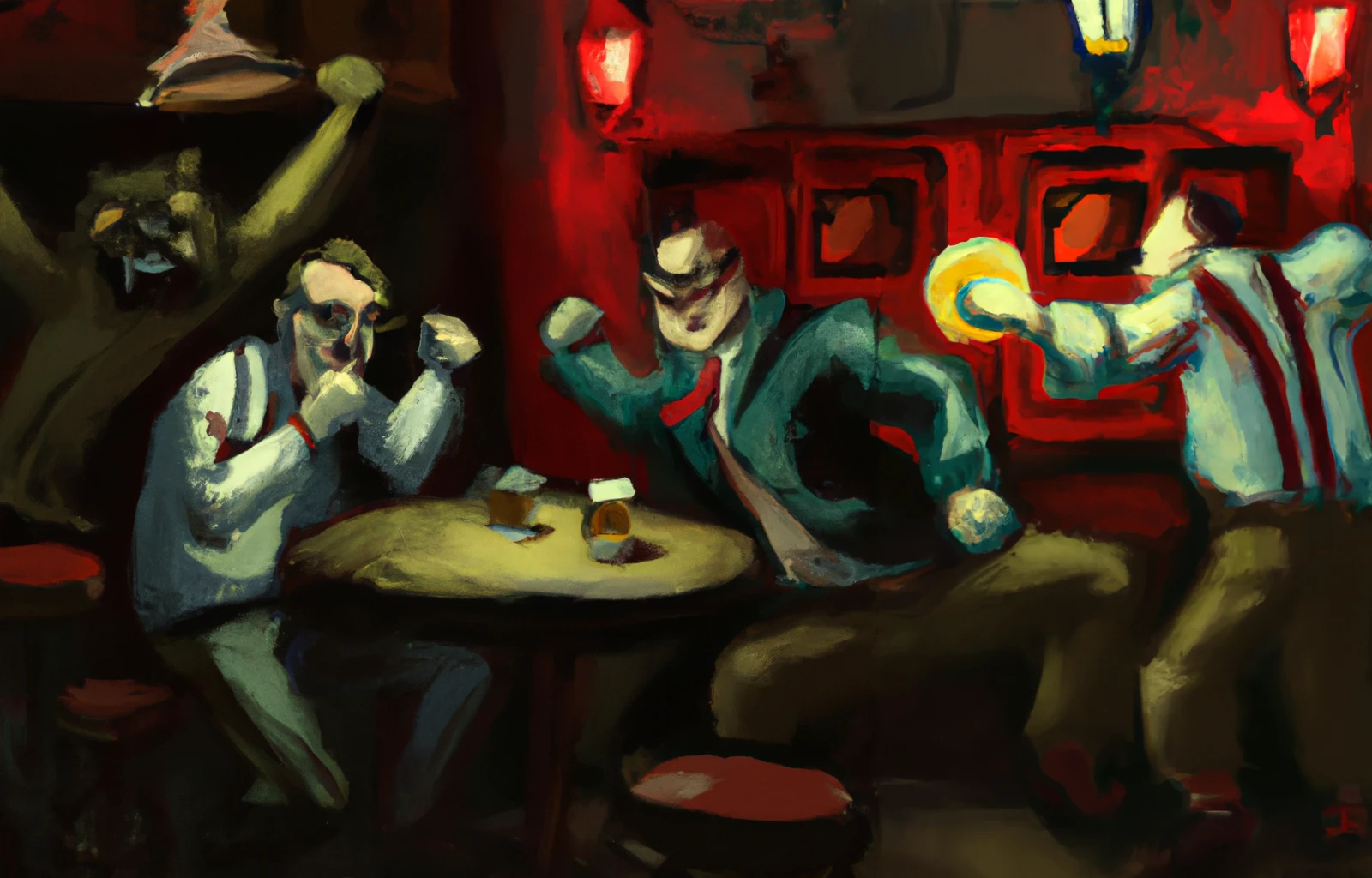 After all, who wants to work very hard to launch something innovative for the world to enjoy, only to see a slower, lazier, or more nervous competitor swoop in and profit from a little bit of clever maneuvering?

This is a downside to public ledgers and aggressive interop hacking could see some brands adopt or develop private blockchains, robbing the world of the bounties reaped from public data and largely recreating the mess of the pre-web3 world.

Regardless of the risks, brands already conquest each other in open arenas like search results and advertising. It’s but a matter of time until agencies start pitching brands on interop hacking. Web3 aficionados can only hope it doesn’t become an annoyance or, worse, destructive to the underlying ethos.

Special shout-out to DALL-E 2 for a very frustrating afternoon generating the bulk of the images in this piece.