Monetization of publicly accessible written content has never had a strong basis on the internet, since it suffers from the public goods problem. As publishing has moved online, funding for high-quality, long-form writing has broken down.

NFTs give us new tools to solve this problem — by representing previously infinitely-reproducible creative works as scarce, tradable digital assets. This means that artists can now sell a scarce digital asset representing an essay as a unique collectible or artwork, while the content itself remains open and freely accessible (a public good). Still, the problem remains for funding the time and work necessary for a creator to produce impactful writing.

We imagine a world where writers on Mirror can publish an intention to research and produce high-quality writing, and receive crowdsourced funding. In this model, the contributors who fund the project also receive a stake in the future financial upside produced by the work, captured by subsequent sales of the NFT. This improves considerably on existing crowdfunding platforms, such as Kickstarter.

To achieve these outcomes, the content must be tradable as a single artifact (an NFT), and the ownership of that artifact must be fractional — allowing multiple people to own a small stake. By using Ethereum as the economic infrastructure, we can allow tradable, fractional ownership of the NFT using ERC20 tokens.

The funders of the project should be able to trade their own currency (e.g. ETH or DAI) for an ownership stake before the project is completed. The creator should be able to withdraw pledged funds and use them to fund the production of the public good. The backers should be allowed to redeem the underlying funds (including profits) once the NFT is traded, proportional to the percent that they contributed to the fund. They can do this by provably burning their equity tokens in a single transaction that also redeems their funds.

Since equity is represented as an ERC20, contributors might also trade their tokens on an exchange like Uniswap, instead of redeeming the underlying value — similar to trading options.

In the future, we imagine that the creator could be the operator of a DAO that produces many works, each of minted as an NFT, with ongoing revenue from trading accruing back to the DAO. Funders of the DAO can therefore expect profits beyond those coming from sales of the first NFT.

This could signal the beginning of a movement towards journalist and artist DAOs.

In this post, we include our technical considerations for this project and a sketch of the contract that might serve this purpose. We welcome any and all feedback on our ideas. We will target a demo of the working functionality on Friday during a live-stream. 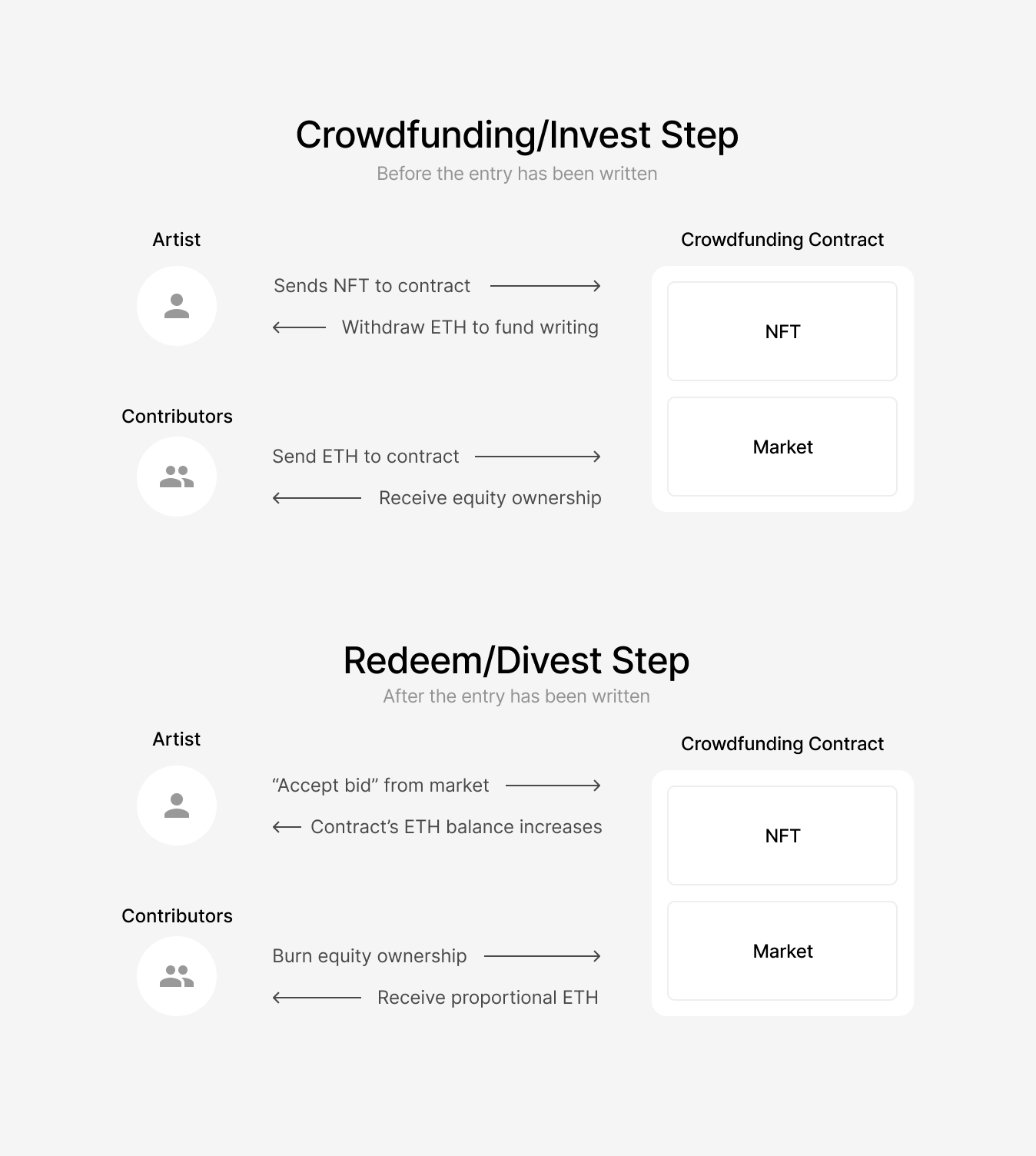 Basic sketch of the contract (please do not use in production, this is just a sketch and not intended to compile).