The Translation of Finance: The Midpoint between Robinhood & Runescape

For hundreds of years, finance was a discipline only understood by a privileged set of individuals - those who were either highly educated or who understood the complexities of the financial markets.

Traditional financial products weren’t designed to be understood by the masses. They were designed to allow those who understood them to profit from them massively. If you’ve ever seen the movie The Big Short, you’ll understand what I mean:

“Mortgage backed securities, sub-prime loans, traunches. It’s pretty confusing right? Does it make you feel bored or stupid? Well, it’s supposed to. Wall Street loves to use confusing terms to make you think only they can do what they do. Or even better, for you just to leave them the fuck alone.”

Many financial concepts aren’t fully understood by the “users” of finance. The trend that we’re beginning to see is that younger generations want to take a greater role in their financial futures, while simultaneously unable to make sense of the more complicated financial mechanisms and products that shape the capital markets.

In essence, people want to have more control over their money, but they lack the products that allow them to unlock the full potential of the financial system.

A few months ago, Gaby wrote an interesting post on how linguistic relativity shapes our worldview. She made reference to the Sapir-Whorf Hypothesis, which states that our perceptions of how things exist are inextricably linked the language we use to describe them.

While this has applications throughout technology, I find its financial implications even more interesting. The vernacular that we use in finance has remained the same for centuries, forcing a rift of understanding between those who can “talk the talk” and those who simply do not understand it.

Consequentially, this has altered the perception of finance per individual depending on how they view their own understanding of finance and their overall financial literacy. If someone has a better grasp of how financial products and money work, they have a better chance at being able to use that information to their advantage. If they do not, it’s not surprising that financial freedom and literacy feel far out of reach.

This is where I find the entrance of GameFi to be particularly interesting. Let’s just look at the numbers:

At this point, gamers represent about 3.5 billion people, or about half the world’s population. That’s a staggering number when we think about the number of people who are more comfortable with playing games online than they are with investing. To me, the logical question is how we can reconcile a lack of understanding about finance, with the apparently ubiquitous understanding of gaming.

GameFi, or the visual representation of financial applications with a gamified user experience, enables the intuitive understanding and use of financial systems, without any of the jargon or even education. It essentially serves as the universal unlock to “translate” the unknown into the known. It’s become clear that the “interface” of finance is not optimized for today’s user, however GameFi serves as a translation vehicle, allowing users to interact with financial instruments in novel and familiar ways.

The gaming thesis in Web3 gets criticized mainly from a top-down perspective. Pundits claim that there aren’t enough compelling reasons for game studios to be incentivized to share with the users of their games. But let’s take a closer look at why they might be wrong:

I specifically remember the first time that I downloaded and used Robinhood. If any of you downloaded the app when I did at the very beginning of 2015, you’ll remember one aspect of the user experience extremely clearly. It was shockingly easy to buy stocks. So easy actually, that it seemed dangerous. Robinhood substantially lowered the friction to becoming an investor.

As a product, Robinhood’s team was laser-focussed on building a UX that simply made it so easy to buy stock that you really had no reason not to. The UX was gamified. The UI was clean and bright – lot’s of white space and minimal text. And best of all, it was free to trade. So very quickly, Robinhood’s user growth went parabolic, in part, because it was simply the easiest option. 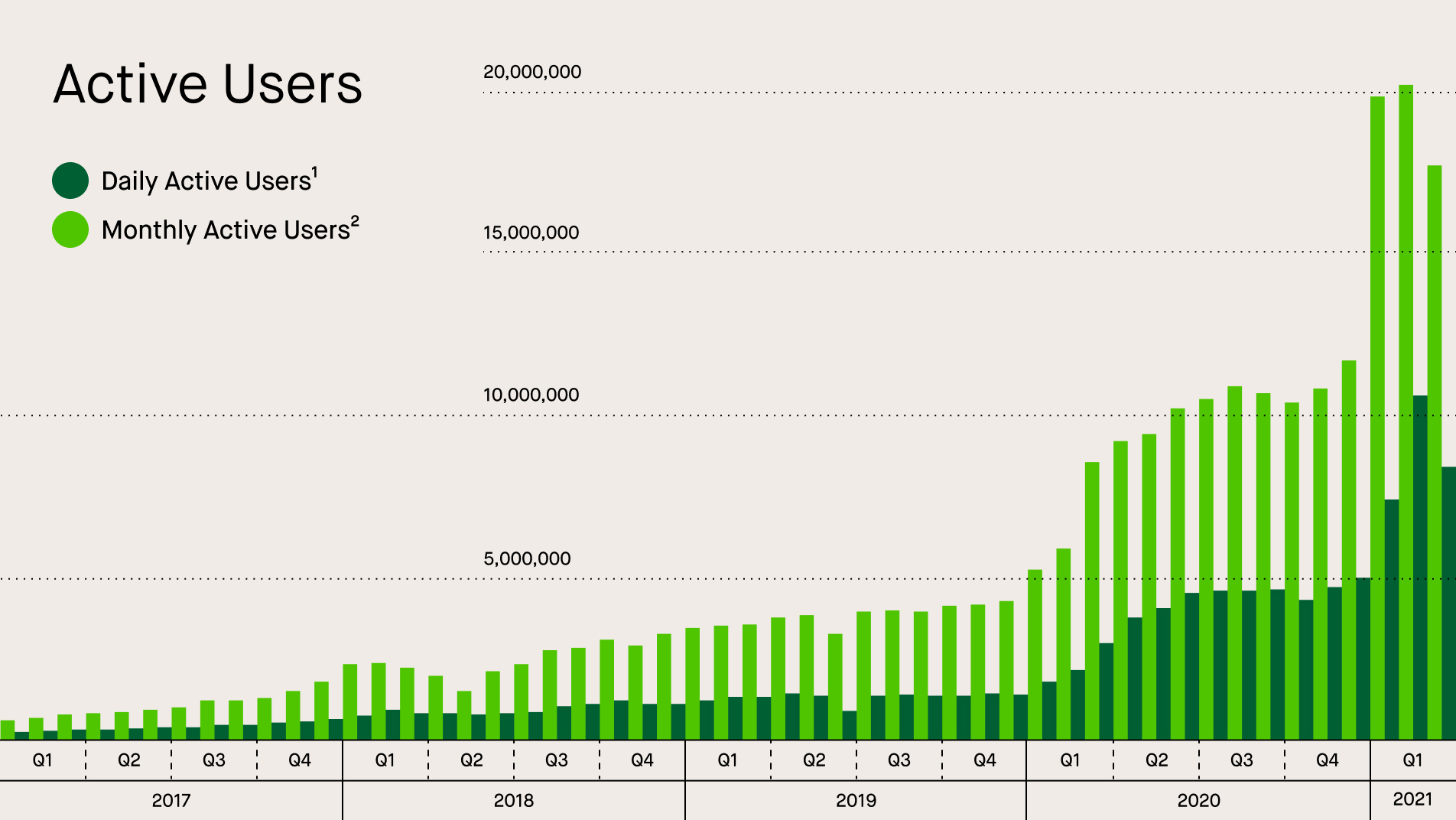 I strongly believe the same is going to happen for winners in the GameFi space. Robinhood still requires that the user manage their portfolio and risk, know how to execute certain order types, and be relatively educated about how to trade in liquid markets. In GameFi, the user experiences a game on the front end, while engaging with the financial system on the back end. Imagine a world in which you could invest in the stock market through intuitive gameplay.

Rabab Ahsan, a research and writer for Tearsheet dives deep into the mechanics behind Robinhood’s early user growth:

How does a company “lure” young investors? According to critics, the answer is in the hyper-gamified Robinhood user experience. The app has been accused of failing to adequately communicate risk by downplaying the importance of risky investments…To find out more about how Robinhood entices the “plug and play” generation Z to invest, I went through the last three years of Robinhood’s user interface.

This can’t help but remind me of one of my favorite games in middle school: Runescape. The Grand Exchange served as a marketplace, enabling market making for players to trade. This serves as a perfect MVP of GameFi in Web2 - a bunch of 12 year olds interfacing through a market maker directly with each other on a Web2 exchange after school to arbitrage in-game assets. Ask those same 12 year olds to execute an options strategy through a perpetuals exchange and I guarantee not a single one will understand you.

Interestingly, the in-game economics within MMOG partially reflect real world economics and can serve as a laboratory for economic experimentation so that game engineers can iterate on technicals. A detailed academic analysis done by Tanla Bilir on Runescape’s game economics determined that:

There are also a set of perfect competition circumstances that create inaccuracies in these games compared to how real world economies function including perfect knowledge, homogenous products, low entry and exit barriers, etc. In essence, Runescape is a primitive economy that exists on “easy mode” whereas real economies are much more interrelated and complex. It’s my hypothesis that in the future, game economies will evolve to become much more lifelike and complex.

We’re in the bottom of the first inning of GameFi: early teams are still figuring out how to build games with financial implications on the back end and the discovery process of those games has yet to really happen. Game economies are still simple and in many cases are closed economic systems. Notwithstanding, GameFi seems like the natural onramp for the financially less literate to engage with crypto without knowing the rails they’re using. By making the experience of using financial protocols 10x easier and more familiar, the barrier to DeFi user entry lowers and user counts can grow.

If this piece resonated with you (or if you disagree!), I would love to hear from you. You can reach me via Twitter DMs.

This post was inspired by my personal research and conversations with the team at Framework Ventures about their gaming theses.

Underrated Series #3: Casting a Vote for a User-Owned EconomyUnderrated Series #1: Spectral FinanceWeb3 has a UX problem: reflections on the user experience of web3 and token-based applicationsWhy I like Gitcoin: How DAO governance can be improved with good mechanism design I'm Joining Framework.