How to Distribute Ownership in Web3

The promise of web3 is that platform ownership and governance will be shared, and the creators of these new platforms have a responsibility to design fair ownership distribution algorithms.

Bitcoin and Ethereum both distribute ownership, but have enriched very powerful entities on the basis of information asymmetry. Was Bitcoin really a fair launch, considering how few people had a chance to even hear about it by the time 1/4 of the supply had already been handed out by the end of 2010?

The Uniswap airdrop distributed ownership retroactively to any address that had interacted with the protocol - all of whom were DeFi early adopters. Combined with the team and VC distribution, this approach creates a chasm; an illusion of truly decentralized ownership: 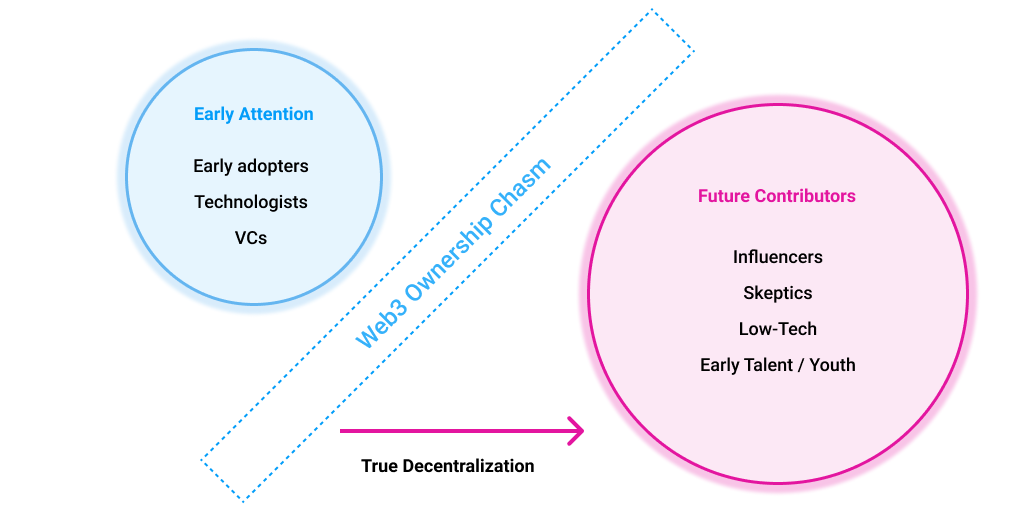 If ownership is distributed only via airdrop, it rewards these early adopters who paid attention to something weird that was going on - like the sale of a $SOCKS token on a website made by some kids in Brooklyn. Certainly, early believers helped the platform succeed and should be rewarded, but often these rewards end up being outsized as the network grows exponentially.

Not all early adopters end up helping long-term. There are co-founders of Ethereum with large ETH positions who are building alternative L1s compete with the network rather than help build it!

Vesting schedules help. But even better is to drip distribution algorithmically. Compound drips COMP from a reservoir according to the users who are risking their assets in the protocol. But the drip still mainly goes to the wealthiest users. For most use-cases in web3, it would be better if a drip like this flowed more equally across a community of contributors.

Another approach is to have a linear "universal basic drip" (like UBI) for each unique individual within a community. In other words, every community member should accrue ownership and governance over time, and it shouldn't necessarily compound for early users. In order to have this, the network needs a superpower: sybil resistance.

Sybil resistance is a network's ability to resist counterfeit identities. Because of the pseudonymous nature of web3, many communities don't have a clear sense of the integrity of their ownership distribution. This makes it hard to prevent one person collecting airdrops and immediately dumping them.

Mirror has minimal viable sybil resistance, via the $WRITE Race. Existing members vote external accounts into the network. This is hard to fake, and it bolsters the community's integrity. Over time, sybil attacks become even harder, as long as the network increases in diversity; having diverse communities makes collusion less effective.

This is why it's been so important for Mirror to go slow with onboarding, and to try its best to diversify its membership. We've received some criticism for this, but ultimately this will enable true decentralized ownership. If we can accelerate membership over time while maintaining integrity, then we can create universal ownership drips that enable hard-to-fake, true decentralization.

Automatic Citations using Crypto Networks and AIUnderstanding PrimitivesSigning Keys, Multi-Device, and the Fundamental UI Problem in CryptoCrowdfunding NFTs with ZoraActing as a Noun