My 1st time building a blockchain app with Buildspace

What can you accomplish with a Twitter account, a laptop, and a willingness to learn something new? A lot!

Back in September 2021, I started looking to learn more about NFTs. My father kept telling me to get into them; someone else approached me with a project opportunity before I even knew what NFTs were, just because I was in tech. I kept seeing them on my Twitter timeline, on youtube. I could not get away from them. So finally, I sat down, and I started to dive in.

Here I was, search after search, youtube video after video, reading tweet after tweet, and then it happened. I came across a tweet from Farza about something called buildspace, backed by entities like Ycombinator, Az16, and Founders, Inc. Buildspace promised to teach devs or anyone curious about building in web3 how to do just that with their cohort-based online learning platform.

So, they would teach me how to build a blockchain app, FOR FREE, in as little as two weeks. I couldn’t believe it. So, I just had to sign up and see for myself. I’m happy I did.

What started as an NFT learning journey somehow led me to the founder of buildspace’s Twitter profile, Farza. Shortly after a few trips around Farza’s Twitter profile and understanding the opportunity in front of me, I pivoted. I completely forgot about NFTs and started going all-in on learning more and getting excited about this buildspace thing. 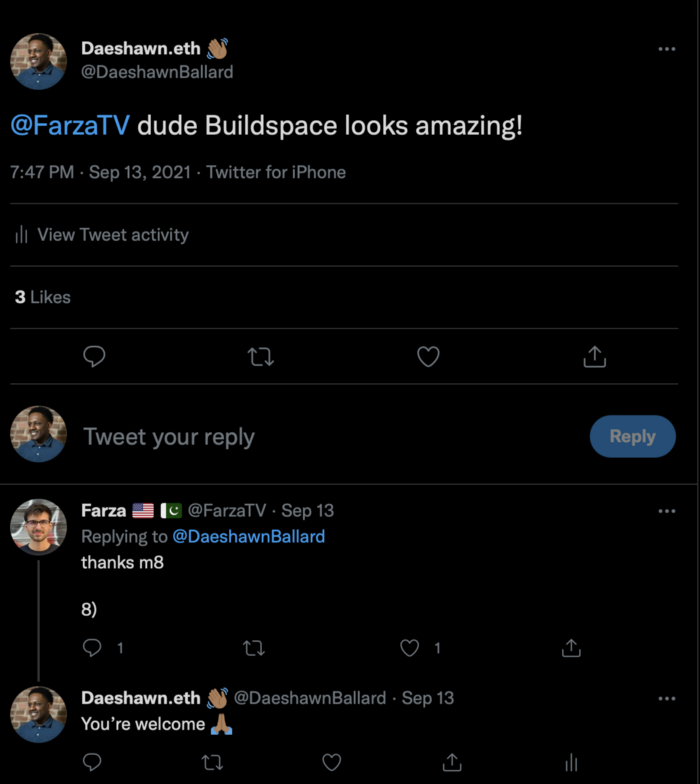 I was really excited 😅…: 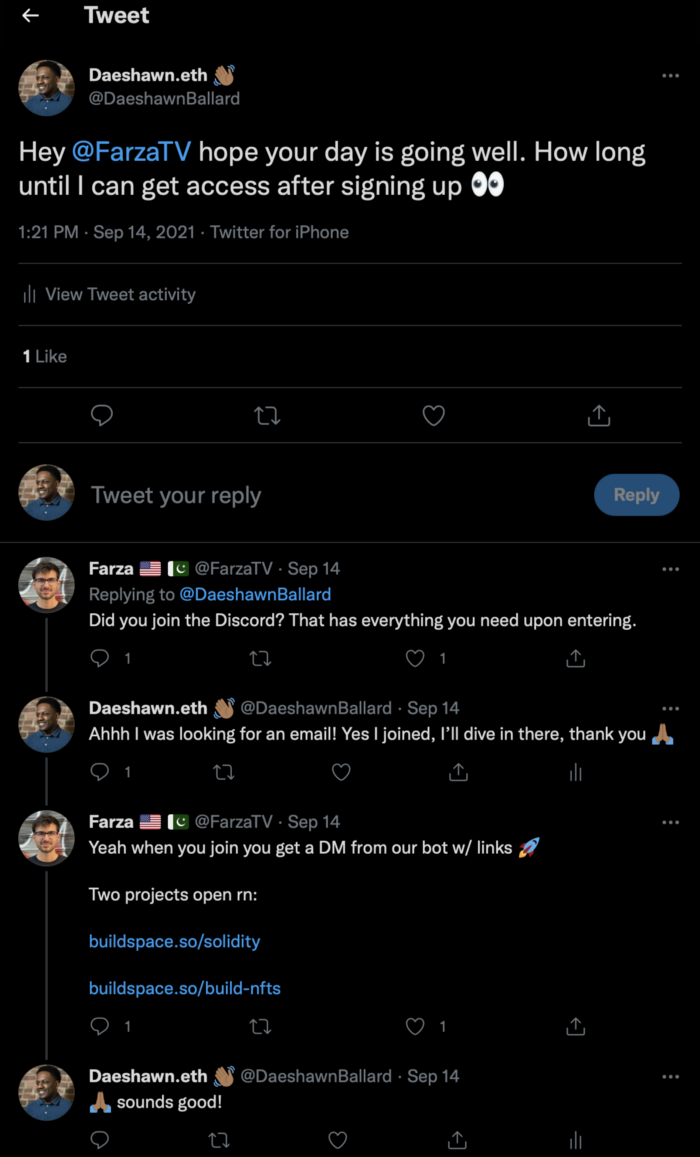 Soon after, I joined the discord, signed up for the next cohort, and the rest is history.

Not only did I hit pause on the NFT learning, but I also hit pause on my iOS studies (and never went back, I might add). I was all-in on building this blockchain app. Nothing was getting in my way of finishing it within the week to claim my free NFT of completion (spoiler alert, I did just that). I found it to be a very compelling reward since it not only was a free NFT but also unlocked potential hiring opportunities through buildspace’s employer network. With me seeing all this momentum and having such a great experience myself, I had faith that its network would blossom and that it would pay off in the future to have access.

So, I got to work. I attended the Twitch kick-off hosted by Farza himself, and I enjoyed the Q&A and all of the energy the chat was showing. It was infectious and motivated me even more. Soon after, I was in the buildspace app, taking my first steps into the world of solidity development. 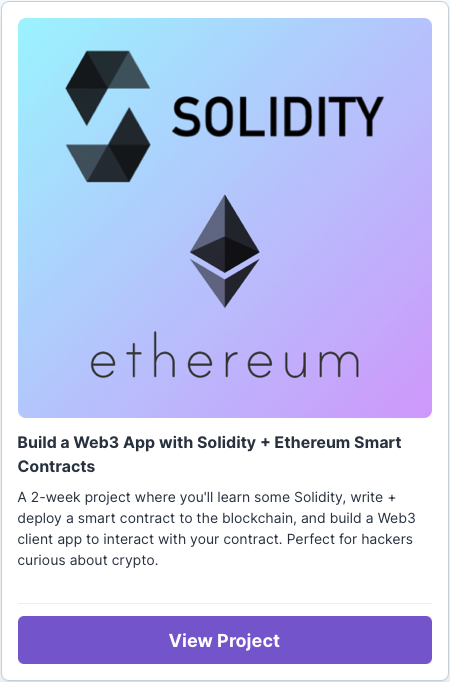 In that world, I worked in VScode, using the programming languages JSX, React, Solidity, HTML, and CSS. I learned tools such as Hardhat and Alchemy to deploy my smart contract to a local ethereum blockchain and the rinkeby ethereum testnet network, respectively. 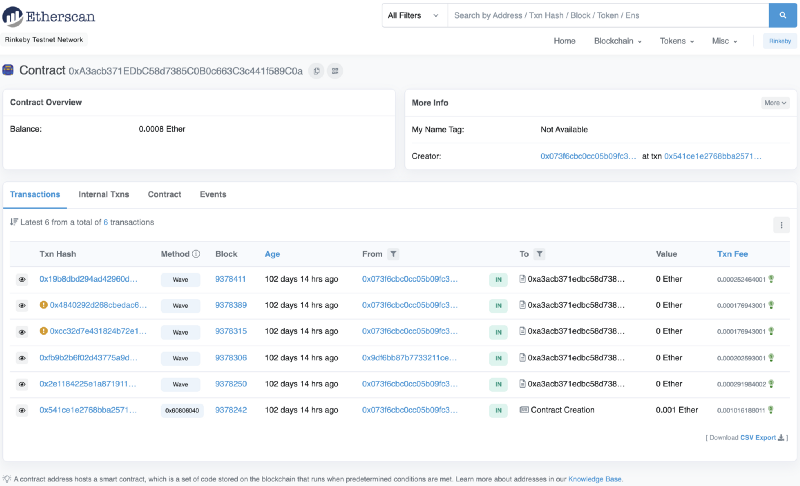 I learned about compiling my smart contact locally, storing data, allowing users to connect a wallet, working with gas limits, and how hard randomization can be within a public smart contract.

Next, I learned to fund my contract to allow for things such as awarding prizes to users, and I had a ton of fun learning and creating it all. Buildspace did a great job teaching me these various topics without a daunting experience.

Here is the result.

If you want to check out the app, you can switch to the rinkeby test net in the respective wallet that supports ethereum and try it out for yourself https://waveportal-baseline-student.daeshawnballard.repl.co, you might even win some test eth 😉.

All in all, I finished the project on time and was awarded my NFT, and I couldn’t have been happier with my progress, dedication, and the friends I made along the way within the buildspace discord. 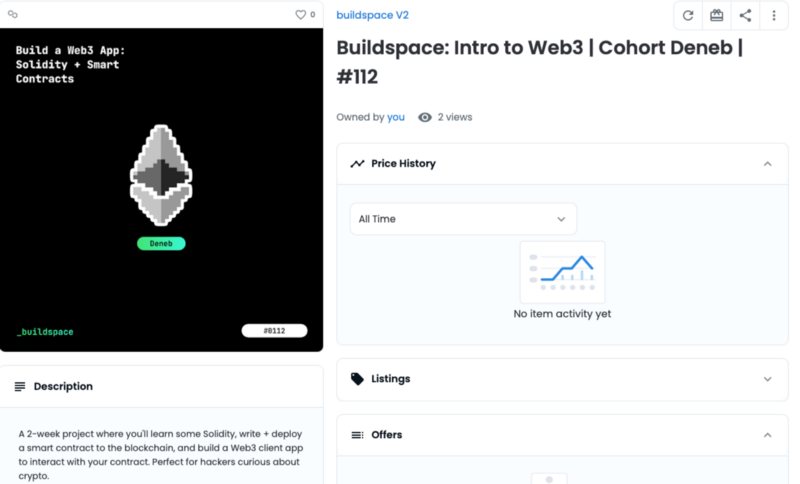 I had so much support and was able to help other students get on the right track or solve a blocker for them ( I even have an NFT to prove that). It quickly and easily became one of my favorite communities. I don’t think I would have finished without it.

It’s not just myself that has felt empowered by what buildspace created. I’ve seen people from the community go from these cohorts to 100daysweb3 challenges, to getting jobs in web3, starting companies, each creating pretty incredible opportunities for themselves.

For example, @fatima39_fatima is a developer who powered through buildspace and has been killing it, sharing her journey by doing a 100daysofweb3 challenge, joining the Developer DAO, and providing helpful super helpful content to the broader web3 community https://aqfatma.hashnode.dev/how-to-get-in-to-blockchain.

Next, you have @shannonlitweets, another buildspace cohort participant, who is on an incredible mission to onboard more women into web3 and even featured in TechCrunch. You can see from the tweet below that it took her no time to find her way into web3. 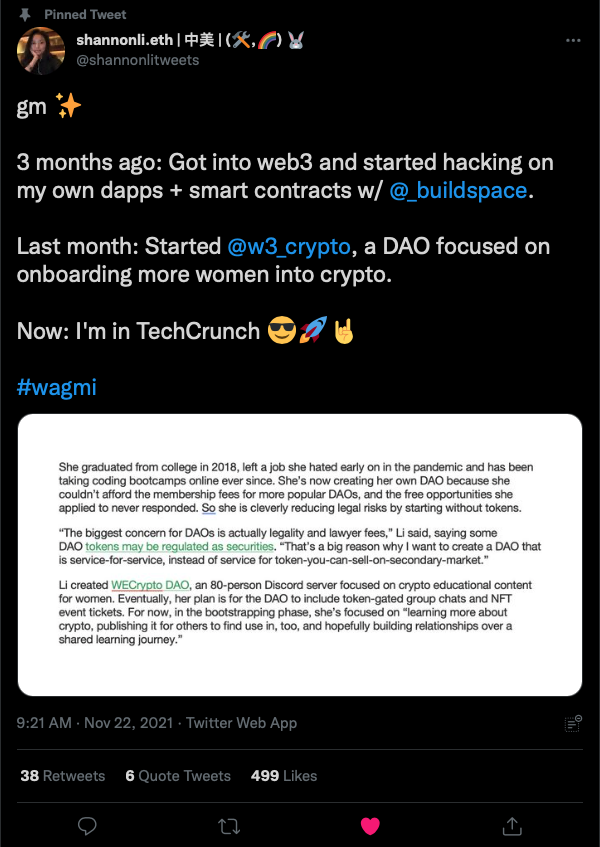 Finally, you have Casey, whom I want to give a special shout-out! I’m not sure if he remembers our peer coding session in repl, but he helped me a ton. As it’s CTO, he co-founded a dope project called Luumen, a crypto budget tracking, planning, and accounting app for individuals and startups, https://luumen.io. 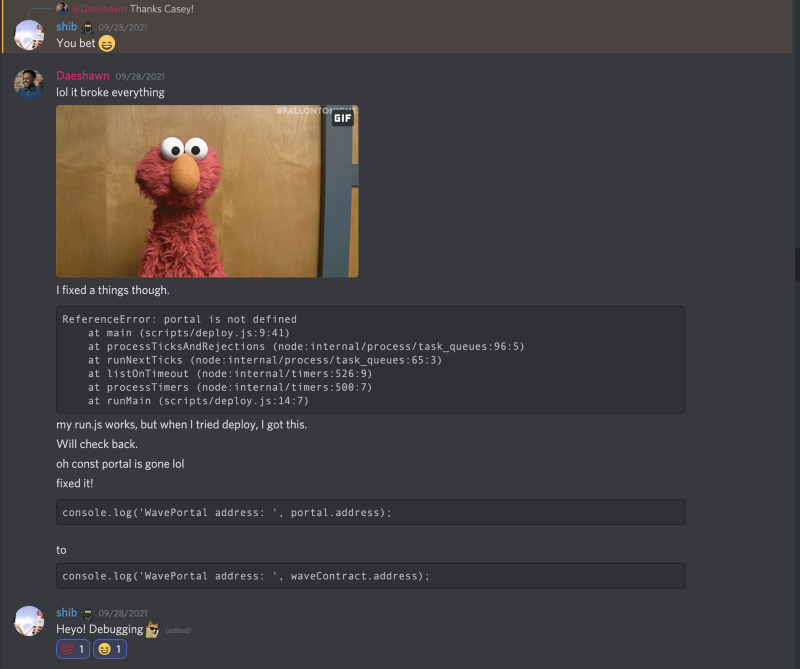 As for me, I’ve since joined the Developer DAO, have been testing different blockchains and Defi protocols, and learning more about web3 overall. I’ve also been minting NFTs, getting offers to contribute to other DAOs full-time, helping to build a real-estate collateralized Defi protocol of our own and more.

It’s been an exciting journey these past five months, and I can’t believe that a simple suggestion to learn what an NFT has led me to participate in buildspace and so many other possibilities.

Recommended Reading
Relay Robot 🤖🚀veDAO Daily News 02/04/2023The ruins of the Anthropocene in the art of Nicola CareddaSeeking a Revamp of the Concept of DAO Answering 20 questions from investors: The past, present and future of Weirdo Ghost GangThe first Constitution of Nation3 has been ratified🚀veDAO Daily News 02/03/2023V2 Futures Alpha UpdateFriday Feb 3. 2023Link3 Growth Incentive Program

My 1st time building a blockchain app with Buildspace