This article is jointly published by X-explore and WuBlockchain.

The address poisoning attack on $0 USD transfers is savage in recent weeks. As of December 2, more than 340K addresses have been poisoned on the chain, totaling 99 victim addresses and more than 1.64M USD stolen.

We would like to appeal to wallet apps to step up risk alerts and ordinary users to be aware of such attacks when transferring tokens.

Recently, our on-chain risk monitoring found that $0 USD transfers occur frequently on ETH and BSC chains. We took the following BSC chain transaction data as an example to illurstrate how is this going. After VICTIM A sends a normal transaction to send 452 BSC-USD to USER B, USER B will immediately receive 0 BSC-USD from ATTACKER C. At the same time, within the same transaction hash, USER A himself will uncontrollably transfer 0 BSC-USD to ATTACKER C (realizing a "back and forth" 0 BSC-USD transfer operation)

Many users in the social media community are unaware of this and fear that their wallet private keys have been compromised, and attackers are stealing assets.

In fact, users who encounter this situation do not need to be nervous, everyone's assets are safe, the private key is not leaked, you just need to carefully confirm the address and not transfer the wrong address is fine. The hacker's methods are very simple:

We consider this attack to be an on-chain address poisoning attack:

Users are vulnerable to capital loss under double poisoning, and all on-chain users need to be on guard together!

In addition, it can be seen that there is a significant regularity in the timing of the attacks, with a significant decrease in the volume of attacks between 17:00 UTC and 0:00 UTC each day. The suspected attackers are in the Asian time zone.

As of December 2, a total of 94 unique addresses have been scammed, with a cumulative total of 1,640,000 USD, and with the increase in attackers' targets, it is expected that a large number of users will continue to be scammed in the near future.

In addition, we analyzed the attacker's cost of attack and the total cost is currently close to 25,000 USD (46 BNB + 9 ETH), with the attacker having a strong preference for BSC-USD and USDT, related to the coin circulation and user holdings of the stablecoin.

We trace one of the attackers, associated with two major centralized exchanges, the complete process is shown in the figure below.

Let us expand further and trace the flow of the stolen funds to the source. 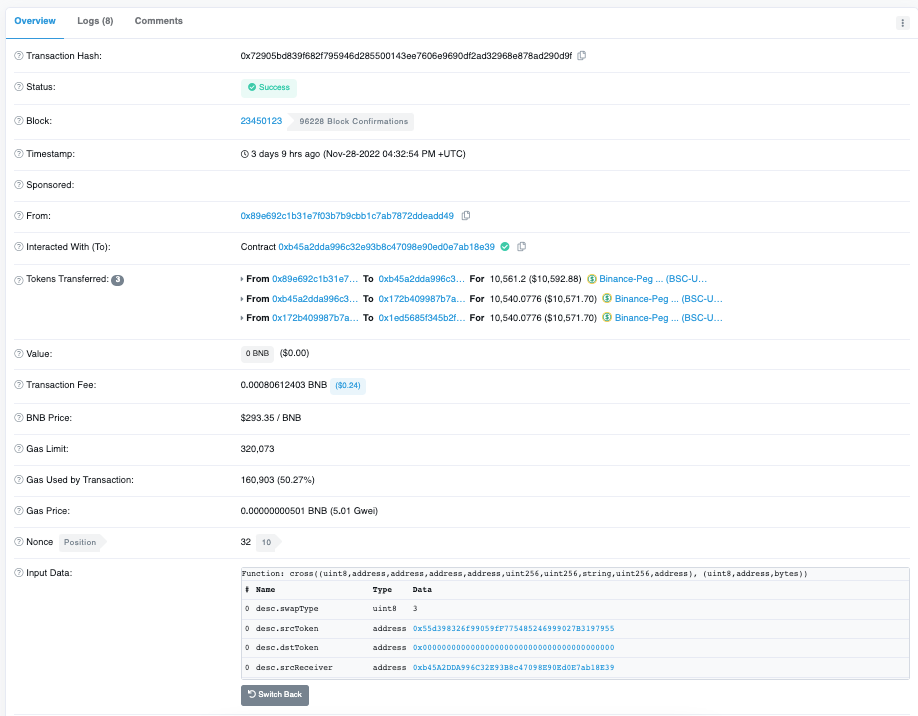 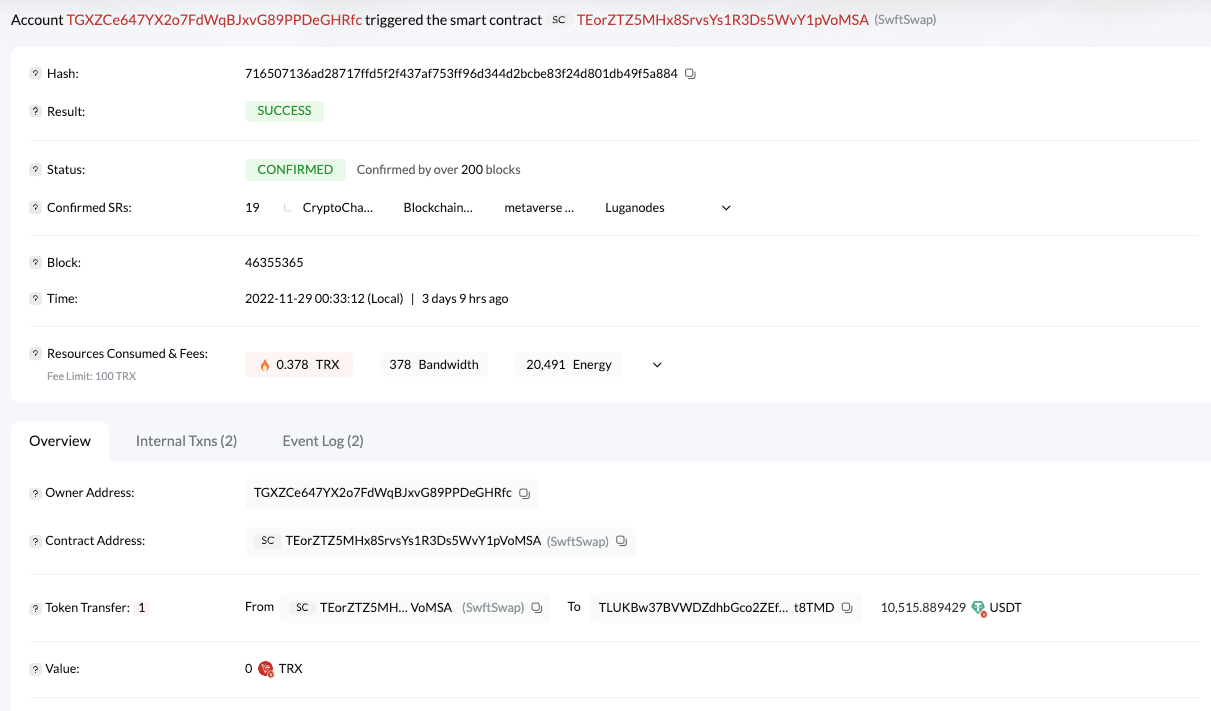 Eventually, the attacker topped up the TLUKBw37BVWDZdhbGco2ZEfdMd5Cit8TMD address into the Huobi exchange. The deposit addresses for the top-ups are: TPtzsrCAG61QMwig3jZV8Px7Rd1WZVnRXG, TDp7r3S1hJeiNfH1CvCVXeY8notY47nagJ

5. Analysis of the Principle of the Attack 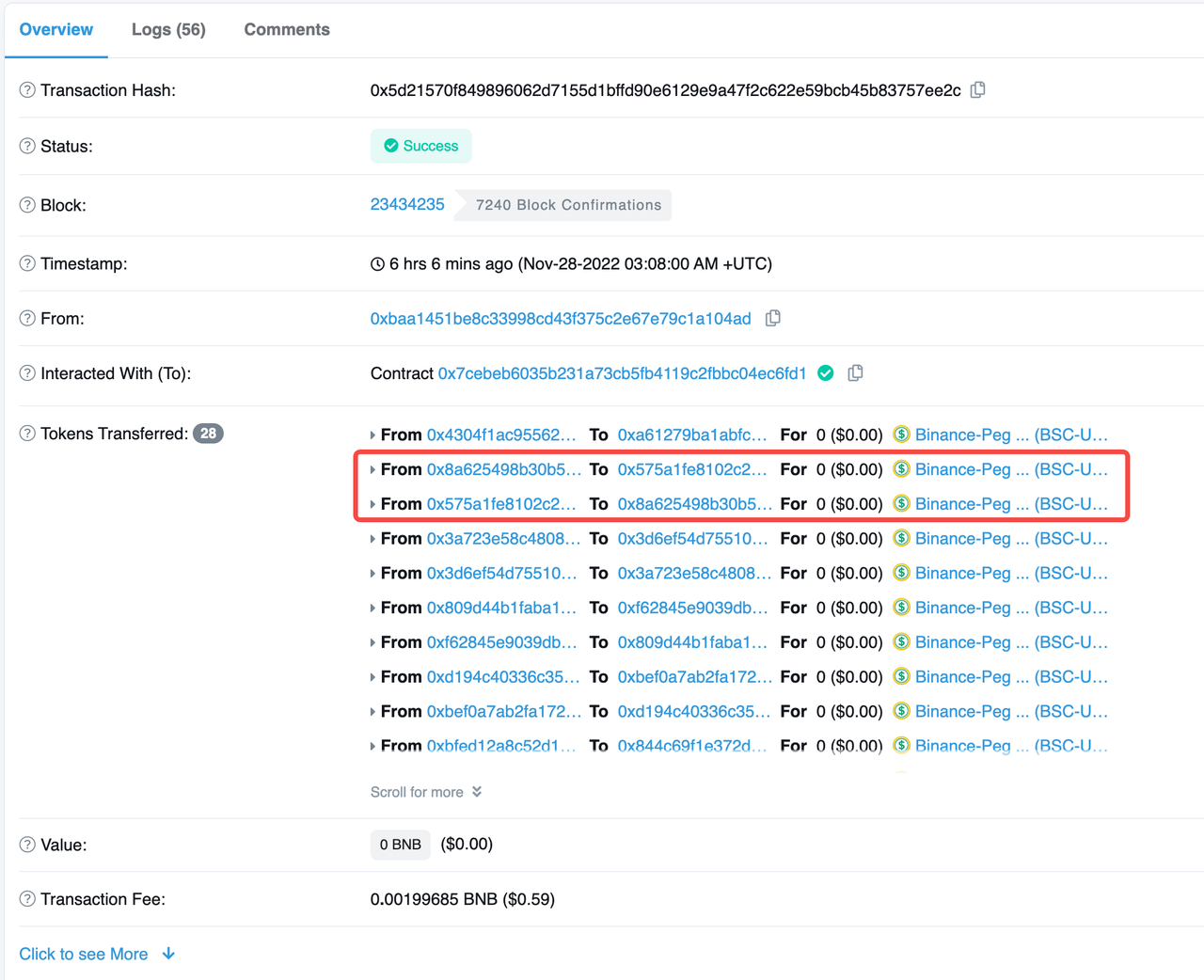 In a transaction where the attacker calls the attack contract, the attack contract only calls the transferFrom() function of BSC-USD, and by filling the parameters with sender, recipient, and amount, it can manipulate the 0 USD transfer between any addresses, and at the same time generate the events of AuthorizeApproval() and TransferTransfer().

The source code of the BSC-USD contract shows that the transferFrom() function calls the _transfer() and _approve() functions in sequence.

The _transfer() function has a simple function. First, it excludes all-zero addresses from the transaction, then it subtracts money for the sender and adds money for the receiver, and finally it records the transfer event. The add and subtract functions used here add()/sub() are OpenZeppelin's safemath library, and overflow will report an error revert.

The _approve() function also excludes the full zero address and modifies the authorization value. The focus of this function is in the parameter calculation of the transferFrom call to approve, which uses_allowances[sender][_msgSender()].sub(amount, "BEP20: transfer amount exceeds allowance") , to subtract the number of existing authorization tokens from the transfer The remaining authorization amount is put into approve and re-authorized. The subtraction function sub() used here is OpenZeppelin's safemath library, and overflow will report an error revert; however, if the parameter amount of the whole process is zero, no detection mechanism can reject the transaction, which also leads to a large number of $0 transfers on the chain that can be sent normally, and the hacker only needs to pay a fee to reap a significant return.

Call transfer () function of the attack in the same way as the principle, the whole process only adds or subtracts the overflow detection, there is no filtering of the zero transfer.

After constructing the address is very confusing, accidentally transferred to the wrong hacker address

X-explore currently provides the real-time on-chain monitoring for such attacks. In order to avoid further harm, we recommend that:

In the meantime, we developed and revealed this address poisoning attack on data basis as the reference, which are supported by Dune.