The combination created rapid growth of membership, attention, and value within these communities. Examples of communities supercharged by ownership include:

These trends aren’t stopping any time soon. Communities with ownership coordinate and grow faster than ever before. They do so by capitalizing on two concepts: skin in the game and FOMO.

Improving coordination through skin in the game.

Owners want the value of their ownership to grow. Because of this, they are likely to:

Owners are also more likely to stick around and try to fix the community if broken. Members without ownership can easily leave if there is little tying them to the community. They are especially quick to flee when problems are hurting their value as individuals. This could create a “death spiral.” Ownership has a chance to break this spiral. Owners balance the value of redeeming the value of a community with further losses. Nothing helps someone want to fix something more than ownership.

Skin in the game strengthens tribal identities allowing communities to build trust and move faster. It clarifies who “us” is and who “them” is. Like in the Wall Street Bets and Gamestop example, communities often take the role of David versus the goliath of big, historical institutions. It is often impossible for the goliath to become an owner of the community, creating clear sides. The community then gets the added benefit of fighting against a collective enemy, only leading to increased growth and trust. This is critical for success in stressful times.

Communities with skin in the game are better incentivized to make good decisions than ones without. This doesn’t mean it always happens. They are just more thoughtful with their decisions. They think more about their decision’s impact on the value of the community, not just themselves. At scale, this can create massive benefits.

Ownership makes the benefits of community clear. You can see numbers going up. Exponentially increasing graphs and triple-digit percentage gains are a good example of this. Owners like bragging about how well their ownership is doing. They do it to show how smart they are, to signal they are part of the in-group, and to try to attract more people to join them. This bragging creates FOMO.

Wall Street Bets is built around making risky bets and bragging about you gains. Ownership makes this possible. Without ownership, bets aren’t risky and gains are small. Gamestop was a risky bet that worked out, and hit the mainstream. When non-members saw how many people were benefiting from the trade, they wanted to join too. The subreddit grew from 3M to over 6M in a week. The bet was perceived as less risky because “millions” of others were also making the it. At the very least, it could also be written off as entertainment. People feared missing out on the clear benefits (and entertainment) it offered and Gamestop shot up to the moon.

When it becomes clear there is significant growth in the value of a community, many new people are interested in taking advantage of it. They fear losing out on the benefits. Luckily for them, ownership is a quick way to join a community. It creates skin in the game quickly and creates a self-reinforcing growth loop. 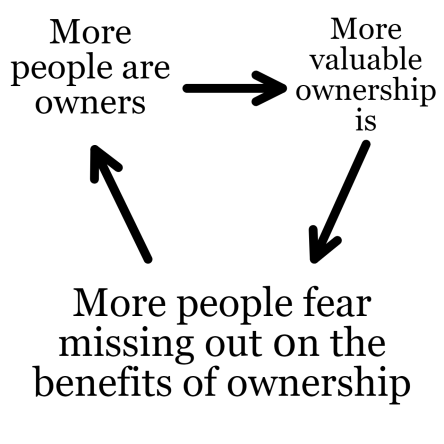 FOMO is also useful for people on the margins of a community. Every communities, especially large ones, loses members. People have limited time and focus. If it isn’t clear what benefit you get from a community, you’ll probably leave. If you fear missing out on a benefit, you are likely to stay longer than someone who doesn’t have ownership. When you are an owner, you stick with what you own. You are likely to revisit the community. You’ll fear missing out on the redemption, especially when a community has redeemed itself once before (like Bitcoin).

For example, more members in OnDeck means more high status people and more recognition of the “OnDeck” signal. OnDeck grows by attracting high status people to lead a growing number of untapped, specific communities. Every community within OnDeck benefits from new communities succeeding. Members are less likely to leave because they fear losing out on the benefits of OnDeck’s momentum. The more quality people join OnDeck, the more their ownership (signal) is worth. As momentum continues, more people are likely to join and existing members are more likely to stay.

From Bitcoin to OnDeck, owners have two reasons to stay: the entertainment and knowledge they get from the community and the upside from ownership. If they choose to leave, they lose both. Owners have more to lose when leaving a community than non-owners do. An owner will likely be a member of the community until they cash-out or better opportunities come along. The fear of missing out on future upsides could be the key piece to getting them to stay.

Nothing creates more fear of missing out than ownership. Communities can use this to their advantage to fuel growth and maintain membership. Ownership gets members to return to a community and makes it more difficult to leave a community. People fear losing out on continued gains from being a part of the community.

Ownership is a powerful motivator for users to contribute to products in deeper ways, be it with ideas, computing resources, code, or community building. This more cooperative economic model helps ensure better alignment with users over time, resulting in platforms that can be larger, more resilient, and more innovative. This is the Ownership Economy, and beyond being a positive social endeavor, the platforms building it are able to leverage the strongest form of market incentives to grow network effects. - Jesse Walden

Communities that create ownership for their members are more likely to grow rapidly and succeed than the ones that don’t. Ownership does not automatically mean something will succeed. It is a way to supercharge something that is working. It is a way to increase growth and improve retention within a community.