Update: A special thank you to David for winning the auction and for supporting this initiative. If you are one of 14 artists that minted on Mint Fund Batch 01, or $BOUNTY holder, you can claim your split below. A full breakdown of the split allocations can be found here. 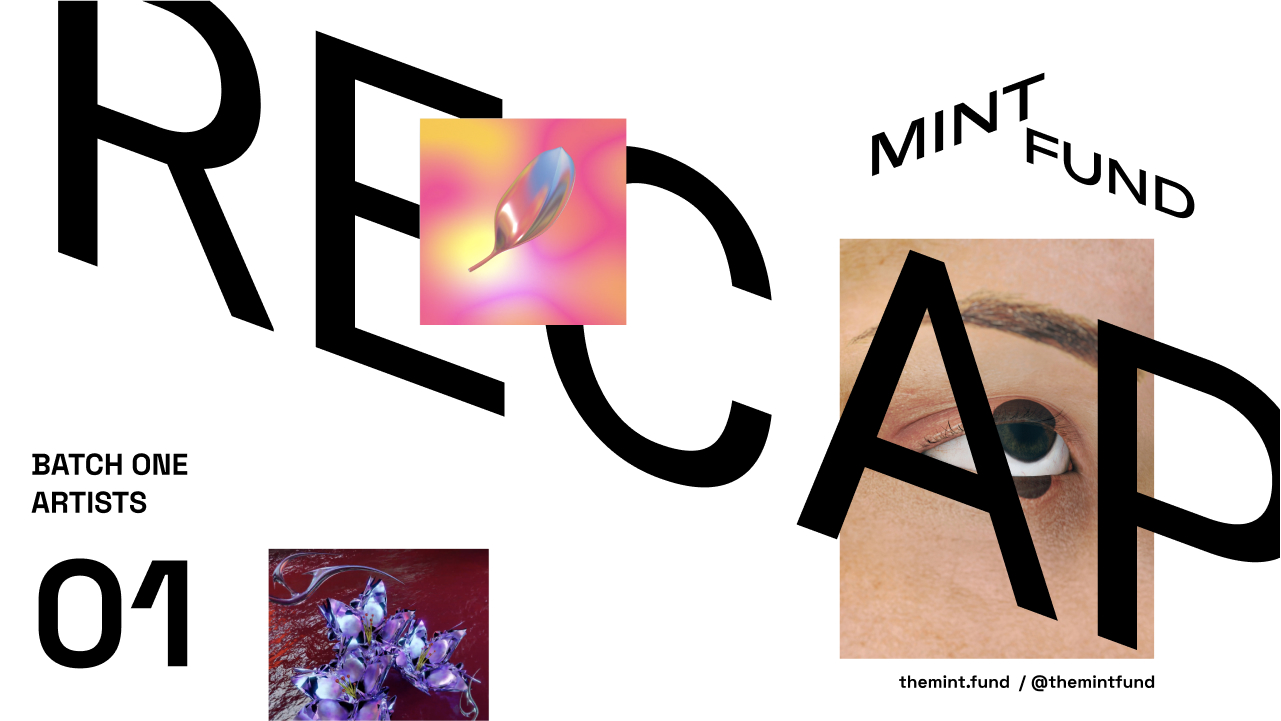 On February 28th, we unveiled our first 35 artists. After two weeks of onboarding, planning, and networking, we knew it was time to mint. We instituted the “Round” method of minting works in groups every Wednesday and Saturday. To date, 14 of those artists have successfully minted and released their first NFTs out into the world. This post serves as a highlight and reference to memorialize the group that started it all.

During the onboarding & minting process, We recognized a few things:

Not everyone's NFT will sell immediately; Artists need more than just one stipend to mint creative works; Not every artist will mint in a specific timeframe.

To accommodate this, and to celebrate all of our artists, we are experimenting with $RECAP NFTs — a special 1/1 gif that cycles through the artwork of our batch groups that will be auctioned off with the proceeds being split among each artist of that batch group, $BOUNTY holders, $BOUNTY NFT Auction Winner and Mint Fund DAO (a total of 47 recipients).

To do this, we are deploying Mint Fund's crowdfunded Reserve Auction ($BOUNTY), and using Mirror recently introduced Splits Auction feature.

We believe in redistribution at every level, and with our $RECAP series, we can ensure that artists can earn ETH so they can continue minting.

The Final distribution percentage was rounded for simplicity. A full breakdown of the Batch 01 Split allocations can be found here.

SECOND MINT ✺ Deaf artist and designer, Ravi Vasavan lives, bakes, bikes, camps, sings, and loves in London. Ficus 1/3: After experiencing birth, existence, and death up-close, this work is reminder that we are in a constant state of rebirth.

THIRD MINT ✺ Kenneth Lartey is a filmmaker and DJ. Some Friend You Are: An unreleased work designed for legendary underground DMV artist Sir EU, originally used for one of his musical projects.

FOURTH MINT ✺ Cy Tone DISORDER: Inhale / Exhale / Inspire / Create "All Content is Copyright-free, everyone can use it as he/she/they prefer, we don't give a [ˈfʌk]. Culture is a human heritage not a mass production tool." “test, experiments, results”

SIXTH MINT ✺ Rimbawan Gerilya is a visual artist and VJ from S.E.Asia working mostly with the music scene. GMO Utility Trike: In 2020, Gabber Modus Operandi live gigs were cancelled. They brought the party to the masses through cyberspace with the help of Siko Setyanto, a dancer, and Rimbawan Gerilya, an animator.

FIRST MINT ✺ Niall Ashley is a self-taught painter from Bristol, England. G-check: A depiction of roadmen in a non-binary context, questioning how we assume gender and overt masculinity.

SECOND MINT ✺ Tigris is 3D Motion Designer & Creative Technologist exploring emotional intelligence and biometrics. Curves as Deep as the Ocean: unveils the depth of waves that uncover serenity and peace within one’s body of the ocean.

FIRST MINT ✺ Ikaro Cavalcante is a Brazilian Artist focused on CGI and Artmedia. Flowers of non-death: is the artists genesis piece and the first work in the "Blood Connection" series of three pieces.

FIRST MINT ✺ Magdalena Molinari is an Argentinian architect and artist. "IRIS N1" - A series of abstract video pieces where the colors from the sky and the circular movements are combined to create "skylike" sensations.

SECOND MINT ✺ Christopher de la Guardia / Dela is an artist based out of Miami, Florida "Beauty In Destruction" is about getting rid of the old world and creating a new one. We are on the cusp of digital freedom.

Get familiar with the MintFund artist community by joining our discord, or following us on twitter. We are in the process of minting our second batch of artists and currently curating our third and fourth groups. We are actively looking for community moderators in multiple timezones, efforts in localizing resources in most common languages, and programming for our growing artist body.

MINT FUND NFT GALLERY + CURATION SPACE As we work with each creator to mint their first NFTs, we’ll be adding their work to our site. This is a space to nurture and highlight the artists we work with. A place to give them all some extra shine. In addition, we will enable auctions using the $BOUNTY auction method to help our artists sell their first NFTs. This also grants curators an opportunity to submit works for MintFund $BOUNTY holders to collect a % of the auction fee from curated sales.

MintFund is a community project created with the sole purpose to build a support network for artists interested in bringing their art into the world of NFTs/cryptomedia.

MintFund provides artists with the funds to mint NFTs (known as gas costs), and offers guidance, mentorship and advice for the growing community of cryptomedia artists. MintFund is accessible to all artists and we prioritize BIPOC and LGTBQIA+ artists, especially outside of North America and the European Union.