The Next Social Graph: Splits, Supports and Attributions

You’ve read a bunch of articles, blog posts, and essays and suddenly see that blinding flash of realization. You’ve formulated an idea that feels new and important and worth writing down and sharing with others. You start pulling together key thoughts, quotes and citations. You organize them into an outline. You write. You edit. You publish.

In the old days (of last month), you’d be posting this work to a simple blog post or a newsletter. It would (hopefully) include links in the text to the sources referenced and shoutouts to those that helped inspire your ideas. The people referenced or quoted might notice. You might tag them on Twitter. They might care a little. The links would mean incremental traffic, perhaps one or two sign ups to their personal blog or newsletter. The dopamine of being referenced would be nice too. But… that’s it.

Now, there’s a different way to create — one that positions you to build upon those sources of inspiration. Instead of using links and tags, by minting your essay as an NFT, you can attribute it, socially and financially, on-chain, to the authors and articles that influenced you. Last Tuesday, the brilliant folks at Mirror introduced the notion of ‘splits.’ To use their language, splits are a native feature that let you route funds continuously to an unlimited number of Ethereum addresses, according to a set of percentage allocations. Splits can be used to share the revenue generated from a sale of an NFT with any set number of collaborators. You can specify that Jonathan should get 20% and Tal should get 40% and so on until 100% of the treasury is allocated. When money comes in, it programmably flows out based on these percentages. This is all handled by the smart contract. Trustless and public.

But another way to use splits, and the more systemically significant one, is to attribute your sources of revelation. As the Mirror team put it, “collaboration then extends to who inspired your idea and to what extent.” In this use-case, you specify that, say, Patrick Rivera contributed 7% of the inspiration, while Packy McCormick provided 4% and Sari Azout and Jad Esber did 12%. When revenue is generated by your NFT, they automatically get their cut.

Splits take behaviors that used to be purely intrinsic and status driven (social cred) and make them financially extrinsic (social + economic cred). It evolves actions and concepts which are inherently viral by pairing them with an economic incentive. When someone gets attributed to an article, even if it’s not a lot of money in her wallet, it feels good. (Packy did it for us, and it felt awesome.) And when people feel good, they tend to want to keep feeling good and make others feel good; first, by creating more content that will inspire other people. But also by, in turn, attributing the people who have inspired their work. By paying it forward, by being a good member of the community of writers, by in effect ‘paying it backward’ and acknowledging what others have given them. Of course in doing so, they are more likely themselves to be attributed again.

But like any foundational change, this will not only impact the way we drive value from the finished product, but influence the creation of the product itself. Splits and other tools like them introduce a business model around the creation of content, going beyond existing methods that focus purely on post-publish production and distribution. This concept has the ability to drive a significant value change to foundational content creation because the financial flows can go much deeper than one level. This isn’t about changing surface level citations and crediting, but about fundamentally altering the entire production, ownership and funding model for digital content.

Our friends from Mirror note, “because crypto allows economics to route between any smart contracts, split value can flow beyond just people to entities like... NFTs.” So when you attribute Sari and Jad’s essay, any revenue you generate can flow proportionally and pool in their NFT. And if they wanted, that pool could continue to flow, according to the attribution splits they in turn determined, into the NFTs that inspired their work. Of course, the same dynamic would occur if someone created an NFT that attributed your essay. Revenue starting at the top would flow all the way down to the foundational inspirations. What used to be hyperlinks and mentions now becomes a financial structure that helps strengthen and fund an entire ecosystem. NFTs and splits have finally given hyperlinks a business model.

Matt Stephenson laid it out perfectly in his recent essay, ‘How the First Great Finding in Empirical Science Was Lost for Decades.’ Focusing on the potential for cascading attribution as a funding source for basic scientific research, he called it a ‘Splitstream.’

The SplitStream is a system in which portions of an NFT sale may flow to some or all of the works the NFT cites, with those cited works then sending some of their funds further along to the works they cite, and so on.

But what if your back-catalog wasn’t stagnant, but rather an ever-evolving source of passive income? What if the value of your work was driven by the number of references and citations, and more references meant more dollars? What if the ROI of an essay that took hundreds of hours to write was orders of magnitude higher than those designed for virality or disposability?

But where does the revenue come from? How does the funding get into this proposed attribution system? What will power this new business model? Are people seriously going to buy essay-NFTs or other content NFTs like they buy Cryptopunks and Beeples?

Likely not. At least not for every content format. While there have been a number of very successful sales of essay-NFTs, it’s just not a perfect fit for the medium. While very old and important books are valuable, essays don’t hold the same perceived store of value as art and collectibles. There isn’t an existing cultural tradition of selling, much less auctioning, written content in the same way.

But when we unpack the reason people are buying NFTs, we see three interconnected motivations:

For writing, instead of outright purchasing an essay, there could be the notion of supporting the essay, of patronizing it. Suppose there are some finite number of support 'spots' for an essay. As a curator who admires an essay, I could purchase the privilege of being acknowledged as a supporter of it by embedding my name or DAOs name in the foundation of the UX. The support capital would flow into the NFT, and then out to the various splits of collaborators and attributors. In this way, I would also be the owner of my ‘spot’ and would be able to sell my ‘spot’ to someone else. I could perhaps even make a profit, as the essay’s place in the web of attribution becomes more established and better recognized.

Of course, the list of essays a particular person or DAO supports would itself be a useful index and source of valuable notifications. By connecting with content in this way, the community acknowledges supporters as essential curators, establishing their reputation while providing a venue for others to follow their selections. So splits have not only potentially created a new funding model for content but for curation as well.

Isn’t there in this system an inherent ‘free rider’ problem? Why wouldn’t someone read all these essays without ever paying to support one? Why wouldn’t someone writing an essay borrow ideas without ever attributing them as his or her source of inspiration? The answer is that they could. Just as someone can ‘consume’ an NFT without owning one. But doing so puts that person outside the community of ideas, and less able to fully participate in its benefits. Someone who never supports is unlikely to be supported. Someone who never attributes is unlikely to be attributed. All of these actions are recorded on the blockchain, transparent and permanent. He can be a free rider, but his track record will make that obvious, just as someone who is a steady conduit for value will be known and rewarded.

What we are really describing -- what Sari and Jad and Patrick and Brian are pointing us to -- is a composable architecture for ideas: NFT-essays building on each other, precisely as Jesse described, as media legos.

Unlike the current Web, where the game is capturing unwitting traffic and funneling it towards the companies paying us, this concept of composable ideas inverts that pernicious tendency. In a network of attribution, we aim to add to and acknowledge the work of others, intentionally driving economic and reputational value to instrumental work, precisely in order so that others will consider doing the same for us. In this system, we want others to build on what we have built. The result is an ever-climbing tower of creativity, where ideas flow up and gratitude flows down. 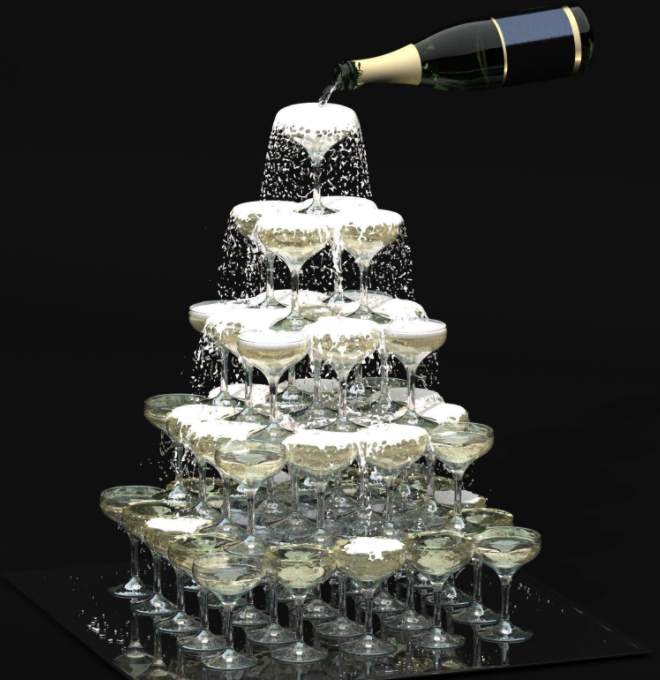 Not all nodes in this architecture can be of equal influence. Some will be much more significant than others. There will be foundational content pieces that are the end-point recipients of the attributions of tens of thousands of other creations. There will be other content pieces that provide essential bridges and flows between seemingly separate topic-networks. There will be curators whose lists of proudly supported content make up the definitive canon on a particular subject and whose support funded the thinking that built a whole new field of investigation and invention. But it is an architecture that gives every individual creator a platform and culture in which their ideas can radiate if they are useful to others.

So this new graph isn’t about who you ‘friend’ or follow, but who you attribute, who you support, and who inspires and supports you. Not as social gestures, but inscribed in smart contracts that deliver economic benefits. Not as traffic driven, but as credit given. Is this a relevant model for every kind of content? Probably not. Like the rest of the ownership economy, the places where these concepts will have the most impact are those domains where a specific community perceives a great deal of merit. Blockchain-based attribution is unlikely to change the business model behind an ephemeral news story, product review or TV show summary. But it is also possible that it changes the way those markets can be served. In addition to the competitive scrambling to be the first and most viral Mandalorian recap, there may also be room for a community of writers, and of writers’ collectives (DAOs and multi-sig publications), who create more thoughtful and lasting criticism by building on and attributing each others’ ideas. The only question is whether there are readers and writers who value it.

Splits, supports and attributions are the pillars of a new Web based on NFT economics. Leapfrogging the fragility of links, we can permanently record these more meaningful associations on the blockchain. Instead of a business based on traffic funnels and user-data harvesting, we can have transparent financial flows. The practice and culture of sharing ownership and credit can change the incentives of creation. Through an architecture of composable ideas, we can add to and amplify each other’s efforts that build a tower of innovative work, solidly established on the recognition and reward of its foundations.

Media 2020: Rise of the Renaissance Creator and the Next Media Model | MediumHip Hop, Blogs and NFTs: Unbundling, Remixing and Reintegrating Media (NFT Drop)Substack vs. DAOstackReputation in Web3: Ships Built on the Great FloodCrypto Soup